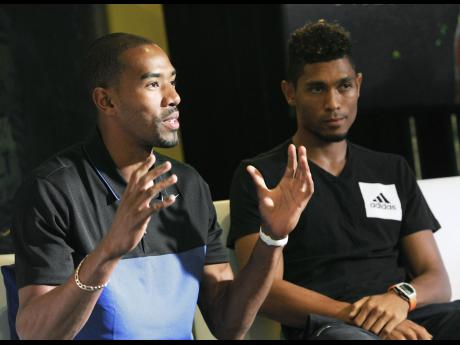 Double Olympic and World Championship triple jump gold medallist Christian Taylor said that although he feels frustrated, he's not the record holder in his event, he still believes that he has time to create history.

Taylor was speaking at the official press conference ahead of tomorrow night's JN Racers Grand Prix at the National Stadium.

He has the next best distance in the triple jump, with a mark of 18.21m, set at the IAAF World Championships in Beijing, China, two years ago. This distance is only 8cm short of the world record of 18.29m set by Great Britain's Jonathan Edwards in 1995.

Taylor, while not definitively saying he would break the record at tomorrow's event, did promise he would do what he can to challenge it.

"I can promise you at least a meeting record," he said.

"I wouldn't be here if I didn't believe," he added. "I wanted the world record. Eight centimetres, that's that. I'm tired of being number two. I'm 26 years now. I'm starting to feel older and older every year. I made my debut in 2011, but I, knowing that, I still have inches and metres in these legs."

Taylor said that although he has a gold medal in the 4x400m from the 2014 IAAF World Relays, and he considers himself to be very quick on the track, he is a triple jumper because it is second nature to him.

"The triple jump came naturally," he said. "I just have fun, I get to run fast then slow everything down. Every kid wants to know what it's like to be Usain Bolt, to be the best person in the class, or what it is like to fly. In triple jump, it enables me to have that feeling of flight."