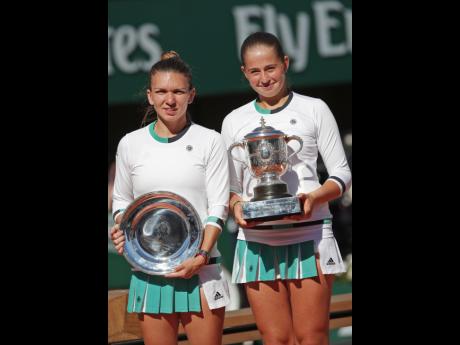 Right from the start of the French Open final, Jelena Ostapenko made it quite clear to anyone unfamiliar with her name, or her game, what she was all about.

She began what would become an enthralling two-hour encounter by breaking No. 3-seeded Simona Halep at love with a series of grip-it-and-rip-it shots, eliciting loud, appreciative gasps from spectators. So what if Ostapenko wound up dropping that set then facing big deficits in the second and third? Ostapenko never wavered, using bold strokes and an unbending will to come back and stun Halep 4-6, 6-4, 6-3 for an unlikely championship at Roland Garros.

"Before the match, 5-10 minutes, I was a little bit nervous," said Ostapenko, the first Latvian to win a major. "But then, when I went on court, I felt quite free."

Halep, a 25-year-old from Romania, was the 2014 French Open runner-up and would have moved up to No. 1 in the WTA rankings if she had won yesterday. She appeared headed for a runaway victory when up a set and 3-0 in the second, plus holding three break points for the chance to lead 4-0. But Ostapenko would not go quietly, winning that game and the next three en route to forcing a third set.

"I felt a little bit nervous," said Ostapenko, the first woman since Jennifer Capriati in 2001 to win the French Open after losing the final's opening set. "But then I felt: 'I have nothing to lose, so I'm just going to enjoy the match and do my best.'"

She again summoned a veteran's resolve down 3-1 in the third set, taking the match's last five games and, fittingly, striking a pair of winners on the last two points.

Ostapenko was playing in only her eighth Grand Slam tournament and never had been past the third round before. Clay isn't even her preferred surface - she likes grass better, and won the Wimbledon junior title in 2014 - which made this two-week joyride even more unpredictable.