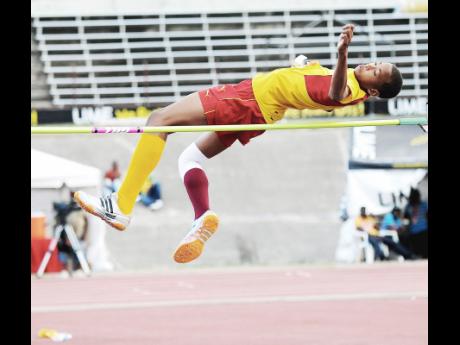 A junior at the Kansas State University, Bryan cleared 2.21 metres on his second attempt in very cold and rainy conditions.

In an interview posted on his school's website, Bryan said: "I am really happy for the win. It has been a tough outdoor season for me so far, but once you are mentally tough, you can achieve anything. I have been working really hard for this, so I am just as happy right now. I want to thank my whole family. I could not have done this without them."

Three other Jamaicans - Nathan Allen, Kamar Mowatt and Clive Pullen - had top-three finishes at the meet.

Competing for the University of Auburn, Allen continued his good form this season in the 400 metres as he remained in the top three on the world list after a good second in 44.69 seconds, behind world leader Fred Kerley of the University of Texas, who won in 44.10.

Allen's teammate, former Kingston College quarter miler Akeem Bloomfield, faded to fifth in 45.13 seconds, while the other Jamaican in the finals, Steven Gayle of the University of Alabama, ended seventh in 45.59.

Former Munro College intermediate hurdler Kamar Mowatt, competing for the University of Arkansas, ran a personal best 48.49 to finish third in the 400m hurdles final, won by defending champion Eric Fitch of the University of Florida in 48.32. Mowatt who is now the fastest Jamaican in the event, moved up to number five on the world list.

Olympian Pullen, the former Kingston College jumper, now competing for the University of Arkansas, finished second in the triple jump with a distance of 16.60 metres, behind winner Keandre Bates of the University of Florida with a wind-aided 16.76m.