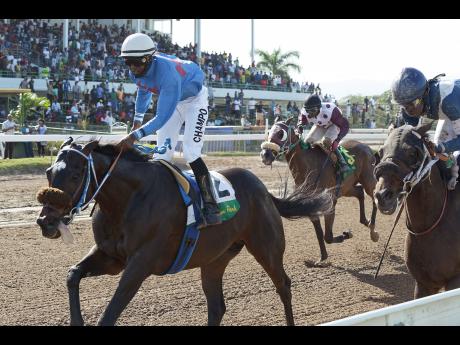 Ian Allen
PERFECT NEIGHBOUR (left), with Omar Walker aboard, gets up to clip BRAWN (Bebeto Harvey) on the line in yesterday's thrilling Viceroy Trophy feature at Caymanas Park.

PERFECT NEIGHBOUR staged a furious late rally, getting up shades from the wire to beat United States-bred BRAWN by a neck in yesterday's Viceroy Trophy at Caymanas Park.

Partnered by champion jockey Omar Walker. PERFECT NEIGHBOUR stalked speedy ANOTHER BULLET out of the mile chute, with stablemate IAN LINKS for company, while BRAWN recovered from a terrible start in the 1800-metre race.

BRAWN, however, caught up with the leaders approaching the half-mile and launched his attack on the inner rail, along with PERFECT NEIGHBOUR on the outside, heading into the home turn.

Pushed to the lead by apprentice Bebeto Harvey, BRAWN shot to the front off the turn and set sail for home with 3-5 favourite PERFECT NEIGHBOUR in chase.

Up to a half-furlong out, BRAWN'S supporters were eyeing the cashiers' windows to collect at odds of 8-5. However, Walker doubled his efforts aboard the 2013 Derby winner, who lengthened his strides with the tote board looming, and leapt forward to collar BRAWN at the winning post.

PERFECT NEIGHBOUR's victory put the Wayne DaCosta-trained seven-year-old back in grade one where he campaigned as recent as December, his last race in the class being the Diamond Mile in which he had finished down the track.

Non-claiming apprentice Linton Steadman rode two winners on the 10-race card to top all jockeys, opening the programme aboard Anthony Nunes' FOLLOW BACK A ME.

He returned to close his two-timer with BALLON D'OR, who turned the tables on STIR IT UP at 1820 metres in the fifth after losing to the mare at a mile on December 20.