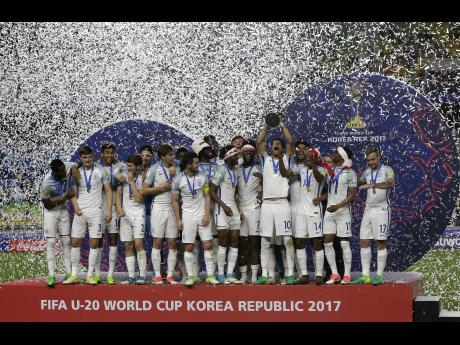 England won the Under-20 World Cup by beating Venezuela 1-0 in the final yesterday for its first global football title since 1966.

Dominic Calvert-Lewin scored in the first half, and goalkeeper Freddie Woodman preserved the lead by saving a second-half penalty from Adalberto Penaranda as Venezuela missed out on a first FIFA trophy.

It ends decades of English underachievement on the international stage since winning the senior World Cup 51 years ago on home soil.

Calvert-Lewin only made his first appearance for Everton in the second half of last season. Dominic Solanke, the striker who was awarded the Golden Ball as the tournament's best performer, recently left English Premier League (EPL) champion Chelsea for Liverpool after making just one substitute appearance.

England winning its first Under-20 title indicates there is talent coming through the youth ranks, especially as some other eligible players were not in South Korea because they have already been promoted to the senior team or are preparing for the Under-21 European Championship.

Of the 16 members of the World Cup-winning squad who did play in the EPL this past season, half were loaned out to a different club.

"It is not for me to tell the clubs how to do their business. They have their own pathways lined up," England coach Paul Simpson said ahead of the final. "We want to see as many of our players playing first-team football as possible."

Unlike their English counterparts, most members of the Venezuela squad are from cash-strapped clubs that, just like the rest of the country, have been affected by widespread shortages, triple-digit inflation and rampant crime.

"They played with their heart and dignity," Venezuela coach Rafael Dudamel said. "We were not able to give the country the joy it wanted, but people will not forget these players."

Venezuela is one of two countries, along with Ecuador, to never win the Copa America and it has never qualified for the senior World Cup.

It had a chance to take the lead against England when Ronaldo Lucena's free kick hit the post.

But Calvert-Lewin broke the deadlock 10 minutes before the break. The forward beat a defender to a free kick from Lewis Cook, had his first shot saved by Venezuela goalkeeper Wuilker Farinez, but reacted quicker to the rebound.

England came close to extending its lead. Josh Onomah's shot from well outside the area hit the crossbar before bouncing on to the goal-line and out.

England conceded a penalty with 17 minutes remaining when Penaranda was brought down by Jake Clarke-Salter. Woodman managed to palm Penaranda's penalty away while diving in the opposite direction to ensure England lifted the cup.