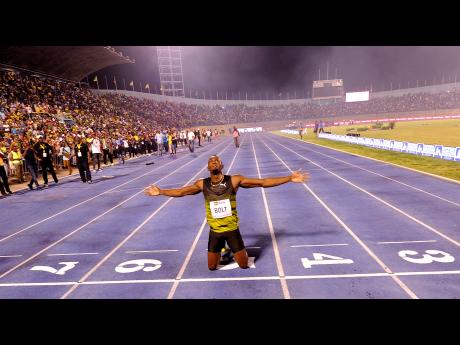 Ricardo Makyn
Usain Bolt on the track after winning his 100m "Salute To A Legend" race at the JN Racers Grand Prix at the National Stadium on Saturday night.

The inevitable moment, not happily anticipated - the final appearance on a Jamaican track of Usain Bolt, the greatest sprinter of all times - came to pass last Saturday at Kingston's National Stadium. Reflecting the massive nature of the promotion, the turnout was huge, with Jamaica's premier sporting facility tightly crammed in. It was compelled to accommodate the multitude of adoring fans who had been full of enthusiasm and excitement - enthralled by the performances of the man who had ruled supreme, many more times than not, during the past 15 years. The energy was electric but shocked no one. Bolt was large and the manifestation thereof was in the event.

With all that in mind, what is the nation doing to capitalise on this popularity and immense worldwide acclaim that Jamaica's hero has brought to its door? It should be noted that Bolt has done his part in that regard. Apart from rolling out his records in debonair style, with all the presence and panache that is imaginable, he has declared that, in the area of further promotion, his country is his constant appendage. Interwoven into his message to the world of film-making, is that any production in which he is required to participate needs to be to the backdrop of Jamaica and all that it has to offer in terms of earning opportunities "for my people". Add to that, the JN Racers Grand Prix meet, where the man from Sherwood Content in Trelawny staged his last hoorah, will stand as a part of a legacy which, given its elite content and execution, is expected to provide the delights of attraction and interest, as it proved at the second staging at the past weekend.

It is now for the relevant powers to complement the Bolt-conceived models by building on what he is leaving behind. The occasion of his local farewell and all the hype and razzmatazz that was on show, should have been seized to announce something quite special. Foster's Fairplay was looking for it in the prime minister's speech, but it did not come. There is talk of slowing down of the country's progress in international track and field now that the legend has started the process to demit office. Given what we saw at Champs, more so with some of the young female talent, if that cessation actually materialises, it could be an aberration, soon to be brought back to life.

Unfortunately, most of the country's brightest talent spring from sources where there is no exposure to the glare of the bright lights that will surround as the athletes threaten stardom. A microphone in their faces to talk about some brilliant achievement can be challenging. This can lead to lack of confidence and composure, and even thoughts that "the other girl is far better than I am." This is not what is wished for when the future of our athletes is considered. The situation presents just one area where the country can address the deficiencies of those who we hope to gather again to celebrate another athlete of the quality of a Usain Bolt.

Foster's Fairplay does not claim any competence in writing a speech for the prime minister for such an occasion. However, how it would have warmed the heart or swollen the nation's pride if the country's head of state, included in his presentation, something akin to this: "There is talk of statues and the construction of a stadium as tributes to this great man, but I want to use this opportunity tonight, as we bid him farewell to local competition, to announce that I have consulted with the private sector, whose image on the world stage has been enhanced several times over, by the feats of this legend, as well as some practitioners in personal development, and we have come up with a plan that will ultimately raise the level at which our young athletes interact with the media to unprecedented standards. I want our athletes, when they go to the international stage, to be able to demonstrate superiority not only on the field of play, but the way in which they present themselves."

The catch was up in the air, just for the taking but, unfortunately, it was dropped.

However, there will be a next time.