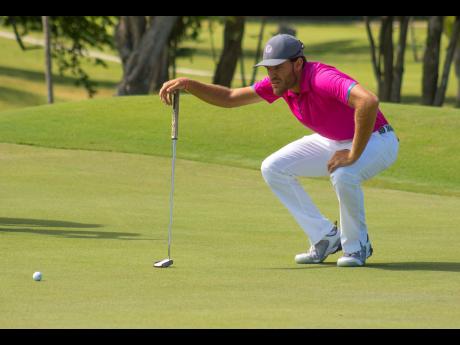 Contributed
Jamaica's Jonathan Newnham lines up a shot before putting in the BMW Jamaica Classic Qualifiers at the Cinnamon Hill Golf Club yesterday.

Australian Troy Kennedy shot a course-equalling 7 under par 65 to take top honours in yesterday's qualifiers for the BMW Jamaica Classic, which gets under way at Cinnamon Hill Golf Course in Montego Bay on Thursday.

Kennedy, who resides in the US, racked up six birdies and an eagle in his impressive round to secure one of eight spots up for grabs in the PGA Latin America event.

With the course in perfect conditions, the first-time visitor to Jamaica nabbed birdies on the opening par 5 hole as well as holes 2, 5, 6, 11 and 12.

Kennedy would then leave his best for last, as his excellent approach shot on the closing 18th hole set up an eagle putt, which he claimed to finish with an impressive 7 under par 65.

"It's my first time to Jamaica, and I was captivated by the beauty of some of the holes on the front nine, but that only motivated me to play even better, and I am glad that I was able to equal the course record at this magnificent golf course."

Kennedy will be joined in Thursday's main draw by CJ Swift, who shot a 4 under par 68. Others who will be joining the more than 140 golfers in the PGA pro event are John Chaney, Gibby Martens, Jarred Garcia as well as Jamaican former junior amateur player Zandre Roy, who shot a one under par 71.