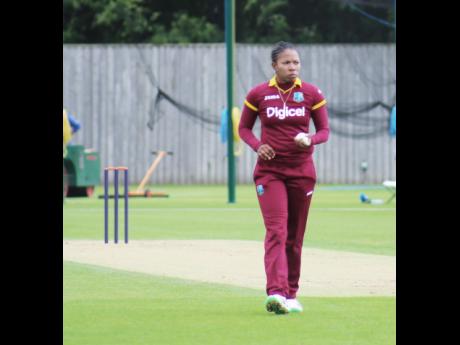 WICB Media Photo
Chedean Nation thinks about her next delivery during a practice match between Southern Vipers and West Indies Women on Friday, June 9 on the nursery ground at the Ageas Bowl.

All-rounder Chedean Nation is hoping to make the most of her second chance in international colours, after a protracted period out of the West Indies Women's side.

The 30-year-old Jamaican was recalled to the side for the tour of India last year and subsequently selected for the ICC World Cup later this month, and said her aim was to find her footing again.

"To be part of this West Indies team is a great opportunity for me personally. The girls have been supportive of me, so it's been good," Nation said during the ongoing training camp at the Ageas Bowl here.

"England is a little bit cold, but we are adjusting well. [I've done] some training with (Ezra) Moseley and (Vasbert) Drakes and Stuart (Williams), so it's been going well so far. There is room for improvement, but I'm still working on everything."

She added: "It's been hard, because after being out of the team for seven years, it's hard, but I knew where I fell short and I worked hard. They said to work hard, and I worked hard on all the areas I needed to improve on.

"There is improvement needed to be done on all areas still, but I did do the work and here I am today."

Nation boasts a modest ODI record, but impressed during the Regional Super50 in the Caribbean this year with a couple of handy knocks for Jamaica Women.

However, Nation said only a team effort would ensure the Caribbean side success against their rivals.

"Everybody basically [will have a role to play] because we have 15 good players here. If they weren't good enough, they would not have been here, so everybody has their role to play," she pointed out.

"All of the teams are going to be threats because these wickets in England are good for batting ... so all of the teams will be coming at us, and we just have to put down our heads and play some good cricket."

West Indies enter the tournament as one of the favourites after reaching the final of the last 50-over World Cup four years ago and winning the Twenty20 World Cup last year in India.

And Nation said the Windies would approach the coming tournament with the same attitude and discipline they did the T20 World Cup.

"The preparation they put in to win that tournament is the same thing we are putting in here, so everybody just know their role to play," she stressed.