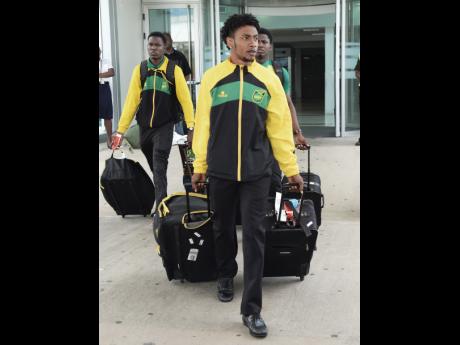 Tivoli Gardens midfielder Tevin Shaw says he is hoping to overcome his recent injury and secure a place in Jamaica's squad for the Caribbean Cup Finals in Martinique.

"This injury is really slowing me down a bit, but, you know, I have to keep mentally strong. I have a never, say, die spirit, so no matter the circumstances, I will always be on my toes, so whenever I do get the chance I will do my best. Right now, I'm really focusing on my injury and hoping I'll make the final cut to Martinique," he said.

Shaw, who turned 20 in January, spoke to The Gleaner at the Norman Manley International Airport yesterday after the Reggae Boyz returned to the island following their 3-1 friendly defeat to Peru in South America on Tuesday.

The former Boys' Town youth player who has been struggling with a quadriceps injury in recent weeks admits he fears that it might damage his chances of being selected for the Caribbean Cup.

"Well, to be honest, I have my doubts because I don't know what the coaches have planned, but I'll do my best to impress them," Shaw said.

The former Camperdown High School standout also spoke of his delight at being involved in the national team for the first time despite not getting any minutes on the field.

"It's a tremendous feeling to know I'm around some of the best players in the national team," said an elated Shaw.

The team will depart on June 19 as they play against French Guiana in their opening Caribbean Cup match on June 22 at 6 p.m.