Winner Holmes says his timing was 'way off' 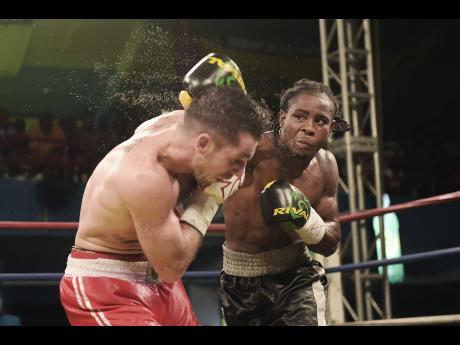 Wray and Nephew Contender semi-finalist Richard 'Frog' Holmes has admitted that he was not at his best on Wednesday night following a unanimous decision quarter-final win over Canada's ", Frank Cotroni at the Chinese Benevolent Association auditorium on Old Hope Road in Kingston.

"I really do not know what happened. My timing was just off, way off, and I could not correct it. If I was finding the mark as I usually do, I would have knocked him out," Holmes said after the fight.

His trainer, Carl Grant, agreed and said "although Frog won, I was not pleased. A win is a win, however, and I am happy that we are now into the money round of the competition.

There is a lot of hard work to be done, however, and after a few days of rest, it will be back to the gym to correct the mistakes that I saw tonight."

Holmes, who no doubt learnt from what he had seen transpire in some of the other fights in the competition, started very quickly. He told The Gleaner afterwards that he knew that he could not fall behind, so he set out to win the first round. He got himself into his rhythm behind his jabs, which he threw in twos and threes, and followed these up with short, jolting hooks and uppercuts.

Cotroni has a tendency to keep his head low, and Holmes took advantage of this with regular use of the uppercut. This set the pattern from the first round and Cotroni took some hard blows in this round. A sizzling right hook to the head from Holmes near the end of the round rocked him, but he dug deep and managed to stay on his feet.

This round was a prelude to what was to follow, and it was attack and counter-attack for the remainder of the fight. Except for the fifth round, which was Cotroni's best, Holmes was the better man on the night. Judges Jeffrey Hayes and Eion Jardine scored the fight 49-46 and Ransford Burton 48-47 for Holmes.

Cotroni's trainer, Jessie Thompson, was also not happy with his fighter's performance.

"Frank was a bit too cautious. This was a fight that he could have won if he let himself loose and attacked some more. He was in the fight all the way and with a break here or there, he could have taken it," Thompson said.

Three semi-final spots are now settled. Holmes has joined fellow Jamaican Sakima Mullings and Canada's Phil Rose in the last four. Next Wednesday, Jamaica's Tsetsi Davis and Canada's Ryan Young will battle for the final spot. The winner of the competition will take home $2 million; the runner- up, $500,000; third place, $250,000 and fourth place, $200,000.