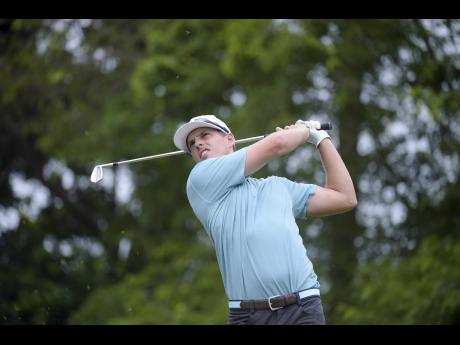 Enrique Berardi
American Brad Gehl in action during the first round of the Latinoamerica BMW Jamaica Classic at Cinnamon Hill Golf Course in Montego Bay on Thursday.

American pro golfer Brad Gehl shot a three under par 69 to move to the top of the leaderboard on yesterday's rain-hit second day of the BMW Jamaica Classic at the Cinnamon Hill Golf Club in Montego Bay.

Gehl, who was lying third after round one, carded three birdies and an eagle on the final 18th hole for his three under par 69 to follow up his six under par 66 in the opening round.

The Oklahoma State University graduate, had only one blemish in his round, as he recorded a double bogey on hole number 14.

Play was suspended twice due to lightning threat, however, a steady drizzle was all the golfers had to cope with for most of the day.

For Gehl, the rain did not hamper his round too much.

"It wasn't too bad out there as I hit some solid shots and putted pretty decent as well, the course is still in great condition and I hope to just keep my focus and play well for the next couple of rounds."

Another American, Tee K. Kelly, also shot a three under par 69 to be tied for second with overnight leader Jared Wolfe.

Kelly racked up three birdies after starting on the back nine, then followed that up with two more birdies on the front. The Ohio State University graduate shot a five under par 67 in the first round.

Jamaica's Fabian Campbell who shot a one over par 73 in the opening round will complete his second round this morning.