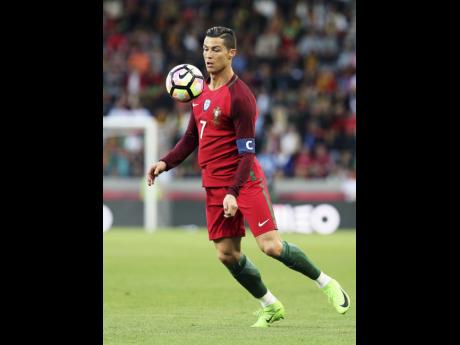 AP
In this photo taken on Tuesday, March 28 2017, Portugal's Cristiano Ronaldo controls the ball during an international friendly match against Sweden.

Cristiano Ronaldo is in the spotlight again, but this time not for his skills as a player. Ronaldo was making the headlines yesterday, two days before Portugal's Confederations Cup debut in Russia, because of a report that said he wants to leave Real Madrid and Spain following allegations that he defrauded the country's tax authorities.

The Portuguese sports daily A Bola published a front-page story saying that Ronaldo was upset with the accusations made against him and that his decision was "irreversible."

The newspaper published the report citing an unnamed source close to Ronaldo. The information could not be independently confirmed by The Associated Press.

Ronaldo's staff did not immediately respond to messages asking for a comment. The player did not talk to reporters in Kazan.

After the report, international media filled Portugal's training session in Kazan, where Ronaldo trained normally with the rest of the squad. Portugal, the defending European champions, play Mexico tomorrow in their Group A opener in the eight-nation competition that serves as a warm-up for next year's World Cup in Russia.

"Ronaldo is motivated," young Portugal forward Andre Silva said yesterday. "He is taking this competition very seriously and is fully focused on training and on the match against Mexico."

On Tuesday, a Spanish state prosecutor accused Ronaldo of four counts of tax fraud from 2011-14 totalling 14.7 million euros (US$16.5 million). The prosecutor said Ronaldo used a shell company in the Virgin Islands to hide the true amount of income made from image rights, among other means of illegally reducing the amount of tax he paid.

Ronaldo has denied any wrongdoing.

"My conscience is quite clear," Ronaldo said Wednesday as he walked from a Portugal team bus into Lisbon airport on his way to Russia.

Madrid on Wednesday issued a statement saying that it was convinced Ronaldo "will demonstrate his complete innocence."