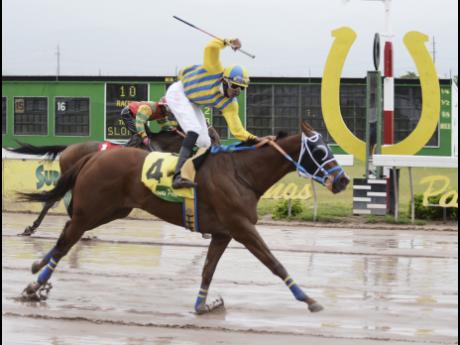 Jermaine Barnaby
CHACE THE GREAT (Jevvanne Erwin) getting home ahead of LOTTERY TICKET (left), with Dane Dawkins aboard, in the Thoroughbred Racing Hall of Fame Stakes event over 1200 metres at Caymanas Park yesterday.

CHACE THE GREAT made all the running to beat LOTTERY TICKET by a length-and-quarter in yesterday's Thoroughbred Hall of Fame Stakes, closing a double for trainer Dwight Chen and jockey Jevvanne Erwin on the 11-race card.

The speedy four-year-old chestnut colt broke sharply to take on ROYAL ASSAULT in the 1200-metre open allowance event before racing clear of his six rivals at the home turn on a track muddied by heavy rainfall.

Running strongly on the lead at odds of 5-2, CHACE THE GREAT powered off the turn, leaving ROYAL ASSAULT in his wake, while 6-5 favourite POKER STAR and PROLIFIC PRINCESS came forward, but not posing a threat to the leader.

Though fitted with a modified one-cup blinker in the May 27 Lotto Sprint, in which he finished third, CHACE THE GREAT's still drifted in the final half-furlong, but was already home and dried in the slop, clocking a decent 1:12.1.

NEVER HAD A CHANCE

LOTTERY TICKET, outsped down the backstretch, ran on best along the rail to finish second. A run-on sprinter, the filly never had a chance against the speedy colt. PROLIFIC PRINCESS, out for the first time since winning early March, stayed on for third at odds of 8-1.

POKER STAR finished fourth with Omar Walker, unable, in his fourth start this season, to recover the form that made him champion sprinter last season.

Erwin had earlier booted home MARKET SENSATION in the fifth for Chen to share riding honours with apprentice Dane Dawkins.

The two-kilo claiming apprentice won aboard the two longest shots of the day - 21-1 stinger LATE N DRAFTY in the eighth and closed the programme in a driving finish astride 7-1 chance RAY RAY, getting the better of CLEARLY OURS.

Racing continues at Caymanas Park on Saturday with the season's biggest race confined to native-breds, the 12-furlong Jamaica Derby.