Davis scouted by I Fight Promotions 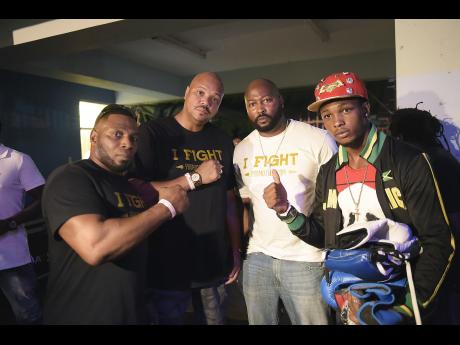 Young local boxer Kestna Davis, who recently made his professional debut, has remained silent on whether he will be signing with I Fight Promotions, despite receiving new equipment from the brand at the Wray and Nephew Contender event at the Chinese Benevolent Association Auditorium on Wednesday night.

However, the 22-year-old, who has a professional record of two wins in two fights, said he is grateful for the support he is being shown by I Fight.

"I feel good to know that people like Chris really see my talent and want to be a part of this. So it's up to me now to show Jamaica what I have," Davis told The Sunday Gleaner.

He said he would not let the attention he has been getting recently get to his head as he knows he still has a lot to learn technically.

"I know I have a lot more work to do in some areas, but I feel like, this year, this time is my time because I feel like I'm ready right now," he said. "What's next for me is to get some overseas fights and to build up my record and become a next world champion."

I Fight Promotions founder, American Chris Joy, said he would like Davis to sign with the company, but he will not pressure him into making that decision.

"We have been watching him quite a while," Joy said. "Talented kid, great potential! We're gonna let him make some of his decisions on what he wants to do, but we just wanna try to help guide him along the way, and if he does wanna sign with I Fight Promotions, we would not hesitate to sign him. We do have a huge interest in him, but we have not signed anyone as of yet from the Jamaican side, but we are here looking to sign Jamaican fighters."

Joy said that I Fight has not only been watching Davis, but other local fighters as well. He said that, like Davis, the promotion will only be advising the fighters with regards to their development and then leave the decision on whether they want to sign up to them.

"There are a lot of Jamaican fighters we're looking at. A lot of talent, a lot of potential," he said. "We don't want to spook anyone. We want to first help develop them and let them make a smart decision at that point. We don't want to pressure any boxer. We're here to develop boxing and get some fighters to sign up with I Fight Promotions."