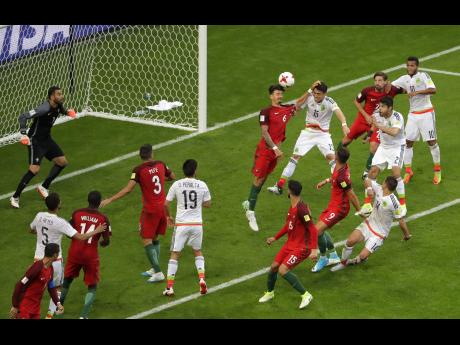 Title contenders Portugal and Mexico fought out an entertaining 2-2 draw in the Confederations Cup yesterday, with each team scoring in the last five minutes.

Portugal looked set for a late win when Cedric Soares scored with a deflected shot in the 86th minute, but Hector Moreno equalised for Mexico with a header in stoppage time.

Cristiano Ronaldo, coming off a tumultuous week off the field, had set up Ricardo Quaresma's opening goal for Portugal, and Javier 'Chicharito' Hernandez hit Mexico's equaliser just before half-time.

The result left European champions Portugal and Gold Cup winner Mexico trailing host Russia in Group A. Russia opened the tournament with a 2-0 win over New Zealand on Saturday.

Soares' goal had to be confirmed by video review, but it eventually stood. Portugal had a first-half goal by Nani disallowed after a video review, when the game was still scoreless.

"In the end, it was a well-deserved result after how we played today," Mexico coach Juan Carlos Osorio said. "We faced the European champions, a team that plays at a very high level, and we played equal to them. It was a great result for Mexican football."

Mexico controlled possession and spent more time in Portugal's area, but the Euro 2016 champions were a constant threat on the counterattack in front of 34,372 fans at the Kazan Arena.

Portugal coach Fernando Santos said it was not the performance he expected from his team.

"We know we didn't play well," he said. "Mexico was better, more aggressive. We played without confidence, couldn't connect two or three passes. It was a fair result for how the teams played."