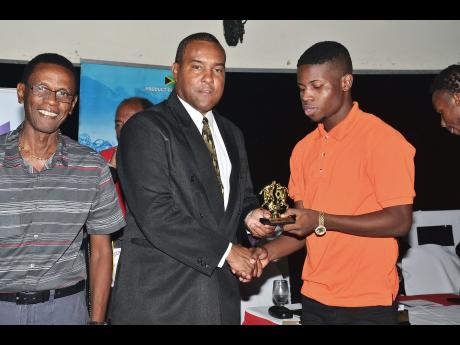 Jamaica National Bank will continue its commitment to the Kingston and St Andrew Football Association (KSAFA) through JN Visa sponsorship of the Jackie Bell Knockout competition.

"We have an ongoing commitment to the development of young people, so we will continue to sponsor the Jackie Bell competition," Michael Collins, JN Bank sales development and training specialist, announced during the JN Visa-KSAFA Jackie Bell presentation ceremony at the Altamont Court Hotel in New Kingston last Thursday night.

"We have gotten favourable responses from the public as a result of our involvement with the Jackie Bell competition," he added.

Collins said the teams showed professionalism during the competition, which started last December and ended in April. He added that the officials and administrators were efficient in doing their jobs, so they are looking forward to what he describes as another great season.

President of KSAFA Wayne Shaw expressed gratitude to the title sponsors and all the associate sponsors of the Jackie Bell competition, which was named in honour of the late Winthorpe 'Jackie' Bell, who died during the World Cup in Mexico in 1986. The competition started in 1987.

He also thanked the Bell family for their continued support of the top Corporate Area knockout competition, which saw 32 clubs participating.

Tivoli Gardens, who defeated Cavalier SC 3-0 in the final on April 19 at Constant Spring Complex, walked away with the winning trophy and $400,000. Cavalier received $250,000 for second place, while Barbican earned $150,000 for third place, and Waterhouse received $100,000 for fourth place.