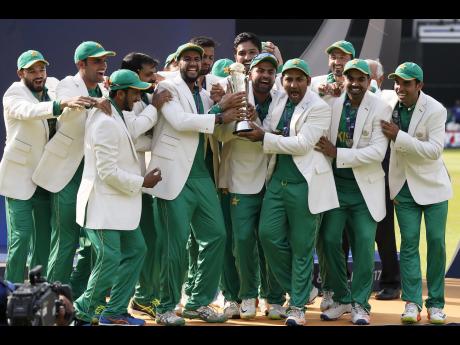 AP
Pakistan players celebrate during the award ceremony for the ICC Champions Trophy at The Oval in London yesterday. Pakistan won the final by crushing India by 180 runs. 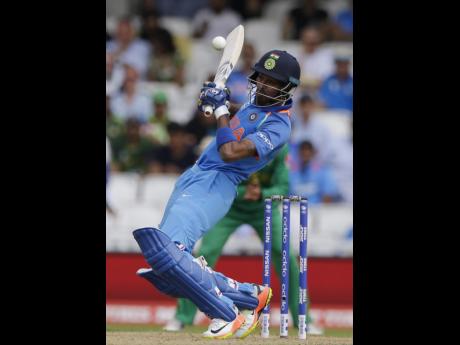 AP
India’s Hardik Pandya plays a shot from the bowling of Pakistan’s Hassan Ali during the ICC Champions Trophy final.
1
2

Embarrassed by India in its opening match, Pakistan astonishingly turned the tables on its archrival to win their Champions Trophy final by a crushing 180 runs at The Oval yesterday.

India were the lopsided 4-9 favourites by English bookmakers to win a record third Trophy in a record fourth final, but Pakistan blew away all predictions and expectations with a win of stunning ease.

Pakistan, made to bat first for the first time in the tournament, racked up a final-record innings of 338-4, founded on a 128-run opening stand between Fakhar Zaman, who earned his maiden one-day international century with 114, and Azhar Ali, whom Fakhar ran out on 59.

Pakistan captain Sarfraz Ahmed took the last catch and aeroplaned around the pitch with his arms out before he was swamped by teammates.

India's top three batsmen - Shikhar Dhawan, Rohit Sharma, and captain Virat Kohli - came to the final having combined for 874 runs, more than 80 per cent of the team's tally in the tournament.

But Sharma was out for a duck off the third ball, Kohli went for five, and Dhawan, the player of the 2013 tournament and a candidate for this one, was out for 21.

All three were gone after nine overs, five of them fierce seam bowling by Mohammad Amir, who was passed fit to play after missing the surprise semi-final victory over England because of a back spasm. Amir took out all three of India's premier batsmen, bowled a maiden for figures of 6-2-16-3, then watched as his teammates mopped up.

Hardik Pandya hit a go-for-broke 76 off 43 balls, including six sixes, but his career-best slog was stopped when he was run out by teammate Ravindra Jadeja. Jadeja was out in the next over, as India's last four wickets went for six runs, medium-pacer Hasan Ali taking two of them to extend his tournament-leading tally to 13.

Pakistan were the last to qualify for the Trophy, the lowest-ranked at eighth out of eight, and written off after its opening loss to India by 124 runs.

But the Pakistanis wrote off that defeat as an aberration. They beat South Africa, Sri Lanka and host England to reach their first Trophy final, where only they believed they could end a seven-match, six-year losing streak to India in global tournaments.