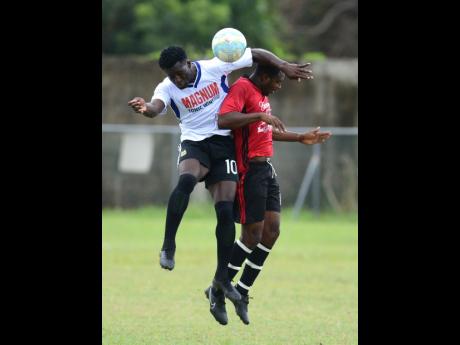 Ricardo Makyn
Priory Academy’s Maurico Gordon (left) goes up for a ball with Rivoli’s Mario Matherson in their match at Drax Hall in St Ann, in the Magnum-JB Charley Premier League play-off yesterday. 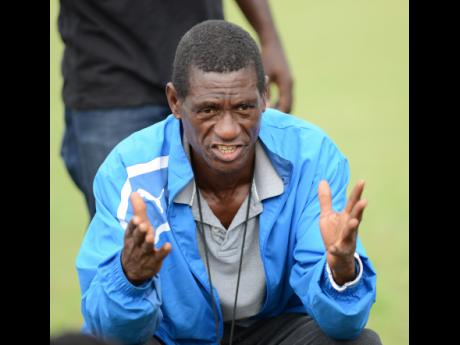 It's a wide open race for the two available spots in next season's Red Stripe Premier League following round three in the Magnum-JB Charley-Jamaica Football Federation (JFF) play-off.

At Drax Hall, hosts Priory started off the game with some good possession and attempts at goal and the all-important goal came from a shot just outside the area from Jamar Studdart that beat Rivoli's goalkeeper Shannon Bartley in the 31st minute.

Rivoli looked better in the second half as Jeremy Nelson, substitute Ross Burton and Owen Walters had some good combinations. However, Priory's defense led by Vivian Hinds, held on for a victory that propelled them to four points.

Coach of Priory, Albert Carnakie, was very happy for the three points that kept his team in contention for promotion.

"It was a very important game based on the points table. This win eases a lot of pressure off the team. It is a good momentum going forward and will motivate the team," Carnakie told The Gleaner immediately after the game.

"I think that with four points, based on what is happening, we have a good chance. But, we don't want to lose any more games," he added.

Losing coach Anthony Thompson was very upset with his team's performance and indicated that there could be changes.

"I am disappointed, as the players failed to carry out instructions. I have to try something different in the next game against Cavalier on Wednesday at Stadium East," a visibly upset Thompson said.

With the first-leg games completed, Cavalier and Sandals South Coast are locked at the top on five points apiece, closely followed by Priory SA on four points, and Rivoli United in last position on one point.