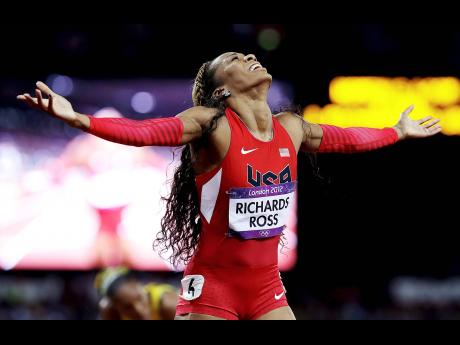 SEVERAL of the country's top local sports administrators, including sports minister Olivia 'Babsy' Grange, were among a fair-sized crowd at the Spanish Court Hotel ballroom last Saturday evening, where many-time Olympian Sanya Richards-Ross had the launching of her two books, Run With Me, and Chasing Grace.

The stage was set very early for a grand function with young David Richards, a student of Vaz Prep and nephew of Sanya, reading an excerpt from Run With Me, which was well received by the crowd. Excerpts from Chasing Grace were read by former Netball Jamaica president Marva Bernard.

Before Richards-Ross took the stage, there were greetings from Mike Fennell, president of the Jamaica Olympic Association, followed by Richards-Ross making presentations to her former schools, Vaz Prep and Immaculate Conception High, and to Grange, who got several of the former sprinter's outfits, including the running vest that she wore when she won the 400m gold at the London Olympics in 2012. Grange also received Richards-Ross' books, which will be displayed in the National Sports Museum, which Grange had previously said is currently being constructed.

Both Fennell and Grange spoke highly of Richards-Ross and lauded her for her new venture, but it was an emotional Richards-Ross who spoke at the end, paying homage to all who had helped her in achieving her goals. "I feel honoured today, seeing the people coming out to support me in the launching of my books, and I would like to thank Minister Grange and Mr Fennell for making this happen, and a big thank you to my brother, Dwayne, as he was very instrumental in me launching this in Jamaica," she said. "Minister Grange, you have always been supportive, as, despite me running in a different colour, I always see you at the Penn Relays and other meets, and you have always supported me," she continued.

She was very emotional when she spoke about her time at Vaz Prep. "Vaz is a high-quality school with a competitive curriculum that also afforded me national-calibre coaches. They set the team up for success by instilling mechanics at a young age and allowed us to practise well. When I moved on, it became so easy for me. To former principal, Beverly Ulett, she was like a second mother, as her home was always welcome for me, and even now, it has not changed," she said. She also had kind words about her family. Also to my mom, Sharon, dad, Archie, and sister Shari, they have always supported me over the years. When I first stepped on the track to represent Vaz, I heard my parents, family, classmates and friends cheering for me," she said.

Richards-Ross said she is hoping her books will inspire others. "My journey carried me beyond the track. Through my books, I hope my stories will help you see your own experience through God's lens as life captured on a perfect photo finish," she concluded. Run With Me was published to target younger readers, while Chasing Grace was focused at a more grown up audience. Both books are now on sale at the Kingston Bookshop.