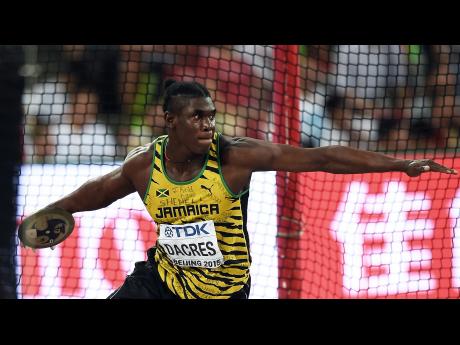 World-leading discus thrower Fedrick Dacres kept his good momentum in 2017 going with his first IAAF Diamond League meet win, as he claimed the Stockholm leg with a throw of 68.36m yesterday.

Dacres, who threw the third-farthest distance so far this season yesterday, managed to get one over on hometown favourite Daniel Stahl, who had previously beaten him in the Oslo leg of the Diamond League on Thursday, but finished second yesterday with a distance of 68.13m.

Dacres said that he was thrilled to beat Stahl yesterday, but he knows their rivalry will continue being competitive throughout the season, which he said he is very pleased with so far.

"This is my best ever season. The conditions were a bit shaky at first, but became really good, and I'm not really shocked with the distance because my body felt good, and when it feels good, I normally do well," Dacres told The Gleaner.

"It's good, he's (Stahl) an awesome competitor and it's good that I beat him, but he'll be back, no doubt, to fight it out again," he said. "It was a very rough fight from the get-go, with the guys throwing bombs in the first round, but I held my composure and made it out on top."

The 23-year-old has set the national record twice this year, first in January at the Big Shot Invitational meet with a throw of 68.67m, then broke it just two weeks later at the King of the Ring throws meet at Excelsior High with a mark of 68.88 on February 11.

He said that his consistency comes from a return to the basics he learnt in his earlier days in the throws events at Calabar High.

"I just went back to my high school, technique, and it's been doing well," he noted.

However, he does not believe his best as come as yet, as he prepares for the JAAA's National Senior Championships this weekend in order to book his spot on the Jamaican team for the IAAF World Championships in London this August.

"We're not peaking for trials, we're holding the load through until Sir King Julian (his coach Julian Robinson) decides to sharpen up for the big game," Dacres joked.

Looking ahead to the national trials, Dacres said he does not have a specific distance in mind that he would like to throw. Instead, he just wants to make sure he is better than his opponents on the day - including training colleague Traves Smikle, Jason Morgan and Chad Wright.

"I have no expectations, really. I'm just gonna compete and the guys should be good and ready to compete well," he said.