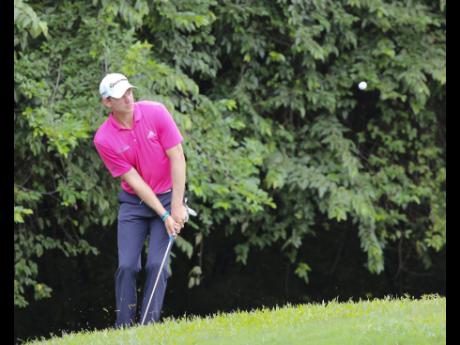 Contributed
American Jared Wolfe plays a shot during the BMW Jamaica Classic golf tournament which ended at Cinnamon Hill in Montego Bay yesterday. Wolfe won with a 21 under par total of 267.

American Jared Wolfe held off a charging pack to secure victory at the BMW Jamaica Classic on the final day at Cinnamon Hill in Montego Bay yesterday.

Wolfe, who entered the day with a six-shot lead, finished the round with an even par 72 for a 21 under par total of 267.

The Mexican pair of Gerardo Ruiz and Jose Rodriquez finished tied for second at twenty under par while American Tee K Kelly was lone fourth with 19 under par.

It was a drama-filled day for Wolfe, who looked comfortable at twenty-three under entering the back nine, but a mistake by his caddy caused an infringement which cost the American a two-stroke penalty.

With only a double bogey on hole thirteen being the only blemish, Wolfe would play steady golf coming in hold off the charging Mexicans, and claim the inaugural BMW Classic title.

"I am so elated right now. I played really well all four days and even though we had that penalty on hole nine, I decided to put in behind me and just did enough to see it home."

For his efforts, Wolfe walked away with the BMW Trophy and US$31,500.

"This win is special for me after coming close in the Dominican Republic last week, I knew I had it in me to finish in pole position this week. The course is in fantastic conditions and the greens were super awesome. I love Jamaica, mon."

Another highlight of the final round was American Michael McGowan breaking the course record, which was set by another American, Jared Garcia, on Saturday.

Garcia held the record for just a couple hours as his nine under par 63 was whipped away by McGowan's ten under par 62 in the third round. His score included eleven birdies.

Tournament director Peter Lindo was a very exhausted but pleased man after the final round.

"I must say that it was a tough week, but a very rewarding one for golf in Jamaica. The weather did its part to make it hard for us, but we pulled together and delivered a remarkable professional tournament here in Montego Bay.

The PGA Latin America tour takes a break before it resumes in August with the COPA NEC tournament in Paraguay.