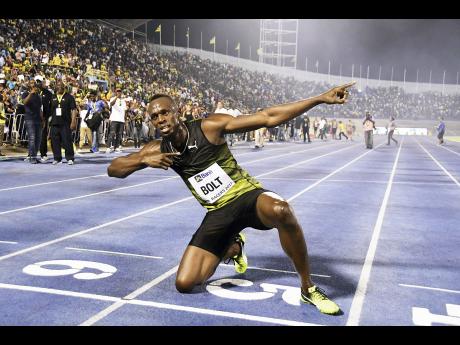 AP
Usain Bolt celebrates after winning the ‘Salute to a Legend’ 100 meters during the JN Racers Grand Prix at the National Stadium in Kingston, on Jamaica, Saturday, June 10.

It is now approaching a full decade since Usain Bolt burst on to the international stage after taking the 2008 Beijing Olympics by storm. The then 21-year-old shattered the 100, 200 and the 4x100m world records within a matter of days.

Beyond the superlatives used to capture the essence and magnitude of Bolt's ensuing performances and his international impact, was consistent talk at home about the nation needing to cash in on his success, popularity, and international appeal. This cliched rhetoric is on the rise again with the imminent retirement of Bolt.

The tone of the discourse is now more retrospective, looking back at the last decade as a missed opportunity. We have had sporadic suggestions for the setting up of a formal sports industry and the increased use of terms such as 'brand Jamaica' and 'sports tourism', usually without much specificity.

I must admit to a personal struggle in grasping the general principle of a national thrust or state driven agenda to cash in on the popularity of Bolt and other internationally prominent Jamaicans. Its strikes me as a covert, convoluted, even subconscious rush, to have an entire nation hop on to the fenders and the wagons of our successful sons and daughters.

We need to be more structured and sophisticated than that in our approach to nation building by, first of all, accepting the global success of Usain Bolt for what it is, an individual Jamaican's success and absolutely not a national success.

Brazil is known, internationally, for consistently producing superstar footballers from Pele to Zico to Ronaldo, to now Neymar Jr. There is certainly no national football policy put in place by the Brazilian government to cash in on the global popularity of its players. Same could be said of Argentina having produced global icons of the game such as Diego Maradona and Lionel Messi. In cricket, Sachin Tendulkar, MS Dhoni and Virat Kohli are internationally known superstars who are accepted for what they are, superstars of sport, just like Usain Bolt is for Jamaica.

What these successful sports stars do is to basically advertise their countries. Bolt and all our other individual superstars, whenever they parade their talents on the global stage, they maintain and enhance the world's awareness of Jamaica. We already have a vibrant and active tourist industry that should accept the prominence of high-profile athletes like Usain Bolt as additional advertisement.

Rather than trending towards nationalising Bolt's popularity, more importantly, from a governmental level, we should seek to address our spiralling crime and unemployment rates, fix our rotting infrastructure, our road networks, health and educational services, et cetera, to ensure that our people are better equipped to host and take care of the visitors that Bolt's prominence attracts to Jamaica.

Furthermore, we should encourage and facilitate the creativity and ingenuity of private individuals and groups who can come up with business-savvy ideas and products to exploit the doors opened by Bolt and others.

We have surely had enough of this idle and unspecific chatter about what we should have done and could have done.

The fact of the matter is that Usain Bolt, and all the other Jamaican citizens with international regard, have been handsomely rewarded for their success. Bolt is the only track athlete to make the Forbes list of richest athletes across all sports. By every stretch of the imagination, Usain Bolt's exploits have been justly rewarded by the market. Usain Bolt has done what he needed to do without any overarching national policy, and he is the one who is deservedly enjoying the benefits. We must honour him and respect him. We should also be inspired by him and stop overcomplicating his success.