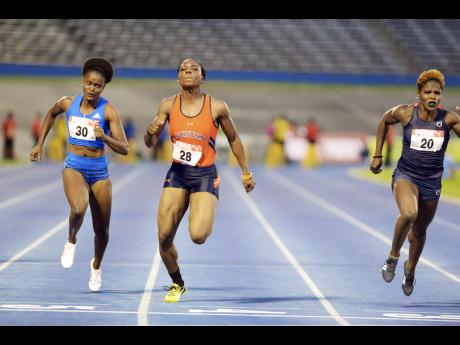 The world's second fastest man in history, Yohan Blake, cruised to a 10.21 seconds win in his heat to advance to Friday's semifinals of the 100m on Thursday's opening day of competition at the National Senior Championships inside the National Stadium.

He was followed closely to the line in heat four by his Racers’ teammate Jevaughn Minzie, 10.22 and Kavean Smith, 10.29, who also both qualified for today’s semifinals.

Former world 100m record holder Asafa Powell also marched into the next round after clocking 10.22 to win heat one.

Raheem Chambers in (10.35) and Oshane Bailey (10.37) finished second and third respectively to also book their lanes.

However, there was disappointment for Kemar Bailey-Cole, who pulled up 20 metres from the line and could not finish the race.

Odean Skeen will enter today’s semifinals with the fastest time after winning his heat three in 10.17 seconds.

Former national champion Simone Facey will enter today’s semifinals with the second fastest time after winning heat one in 11.22. Sashalee Forbes clocked the third fastest time in the heats after she won heat three in 11.34.

Former Munro College’s star Kemar Mowatt leads all qualifiers entering into today’s final of the men’s 400m hurdles after he won his heat in 49.43.

World Junior champion Jaheel Hyde also secured his spot in the final after winning his heat in 49.46. Shawn Rowe will enter today’s final with the third fastest time after winning heat three in 49.50.

Many-time Olympics and World Championships medal winner Veronica Campbell-Brown has withdrawn from the championships because of discomfort in her right knee, while Kerron Stewart is also out because of an issue with hjer Achilles tendon.