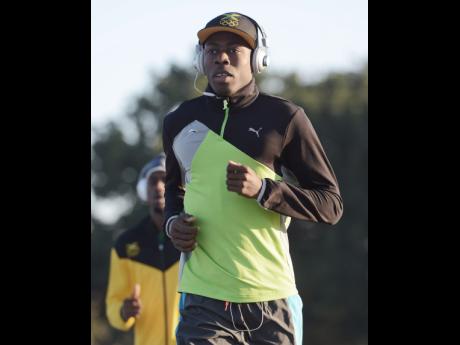 Just when Jamaicans began to dream of an all conquering men's 4x400 metres, relay supremo Javon Francis has been sidelined with a hamstring niggle. It's a pity but the only wise course of action is for him to take care of the low grade hamstring strain that has troubled him for months.

Had he been fit, the two-time national 400 metres champion would be a leader of a group blessed with speed. His Olympic silver medal-winning teammate, Nathon Allen, national junior record holder Akeem Bloomfield, fast newcomer Demish Gaye and Steven Gayle have all run faster than 45 seconds this year. Add 44.69 man Peter Matthews and Fitzroy Dunkley, who ran a personal best of 45.06 seconds last year before helping Jamaica to that silver and you have a mighty fine team.

Francis will be missed. He has been burning the anchor leg for Jamaica since the 2013 World Championships when he was still a Calabar High School student. At just 22, Francis has time on his side.

Presuming good health for them all, Jamaica is in for good times in the 4x400m for years to come. The real task will be to break into the top ranks in the individual 400m. No Jamaican has won a World or Olympic medal since Michael Blackwood's bronze at the 2003 World Championships. Furthermore, no Jamaican has reached a World or Olympic final since 2011. That's when Jermaine Gonzales ran a close fourth in the World Championships.

The days when World and Olympic bronze medallist Greg Haughton reached five straight World Championship finals are long gone. Relay genius Davian Clarke ran his way into two Olympic finals. Seven years before his World bronze, Blackwood, the 2002 Commonwealth Games champion, Clarke and Brandon Simpson were all in the 1996 Olympic final. Danny McFarlane is famed for his Olympic silver medal in the 400m hurdles but he was in the 2000 final when Haughton, the 1999 Pan-Am winner, took the bronze from Lane 8.

The young Jamaicans who run the 400m today must aspire to reach those heights. Whatever happens at this week's National Senior Championships, Francis, Allen, Bloomfield, Gayle, Dunkley and all their peers have a platform to launch bright careers. They will meet the wonderful South African Wayde van Niekerk along the way, but if they stick to the task, good things could happen.

- Hubert Lawrence has made note at trackside since 1980.