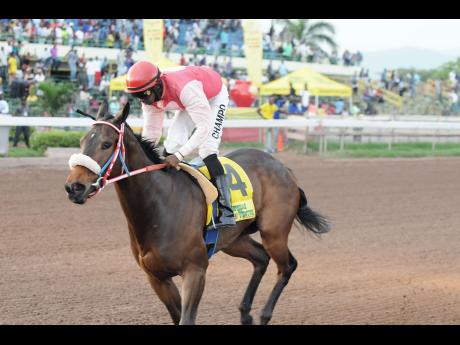 Triple Crown aspirants SHE'S A MANEATER and FEARLESS SAMURAI have been drawn in post positions one and ten respectively for Saturday's 97th running of the Boom Jamaica Derby to be contested by 13 native-bred three-year-olds over 2400 metres at Caymanas Park.

The draw for post positions was conducted by officials of Caymanas Track Limited and the Jamaica Racing Commission in the presence of owners, trainers and representatives of the sponsors in the Trainers' Room at Caymanas Park yesterday.

MARKET FORCE, who won the Lotto Classic after the disqualification of first past the post HENRY THE SECOND, has drawn post position 12 and will be ridden by Shane Ellis for trainer Richard Azan.

The other main contenders for the Jamaica Derby are SOTOMAYOR to be ridden by former champion jockey Dane Nelson from post position nine for trainer Anthony Nunes.

MARLENE MY LOVE from the stables of trainer Dwight Chen, will be ridden by Jevanne Erwin from post position two while Ameth Robles will partner SECRET TRAVELLER (gate five) for trainer Harry Jaghai.