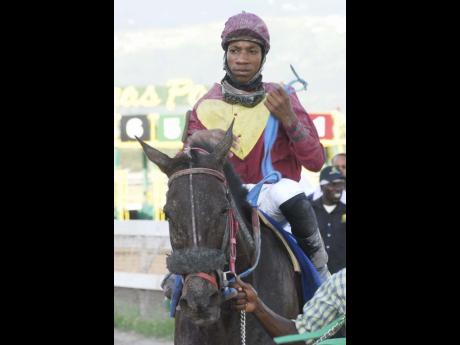 The 27-year-old was forced to wait until race five to land his first winner, but then won three of the last four races to emerge with full honours on the programme at the western Canada oval.

Ridge, meanwhile, finally broke his maiden at Northlands when he captured the day's opening race aboard 3-1 chance Pop's Little Girl, taking the four-year-old bay filly to a 31/2 length win over the three-year-old and upward fillies and mares in a six-furlong trip.

The 18-year-old is in his first season at Northlands Park, in a competitive jockey colony that includes the likes of six-time reigning champion Barbadian Rico Walcott, multiple-time former champion Quincy Welch, also of Barbados, and Jamaicans Dane Nelson and Shamaree Muir.

However, it was the more experienced Balgobin who took the spotlight. He opened his account over 61/2 furlongs, making all the running with 2-1 choice Whinny Magoogin to beat the three-year-old and upwards fillies and mares by 61/2 furlongs.

The five-year-old mare was almost two lengths clear through the half-mile run in 46.71 seconds and drew off handsomely to win by 53/4 lengths.

Balgobin followed up in race six over six furlongs with another gate-to-wire effort, piloting 2-1 chance Mizzen George to a 11/4 length win over the three-year-old and upwards.

The pair duelled for the lead through the first quarter with Walcott's Polka Dot River before hitting the front and drawing off in the stretch.

Balgobin's final victory in race seven was even more convincing as he combined with six-year-old mare Habida to slam the three-year-old and upward fillies and mares by six lengths going a mile.

There were also wins on the day's card for Barbadians Walcott and Kyle Carter along with Nelson.