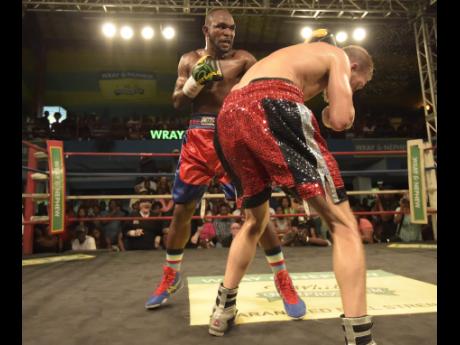 File
Jamaica’s Tsetsi ‘Lights Out’ Davis (left) punishing Canada’s Ryan Young in the middle of the ring during their Wray and Nephew Contender quarter-final bout at the Chinese Benevolent Association auditorium on Wednesday. 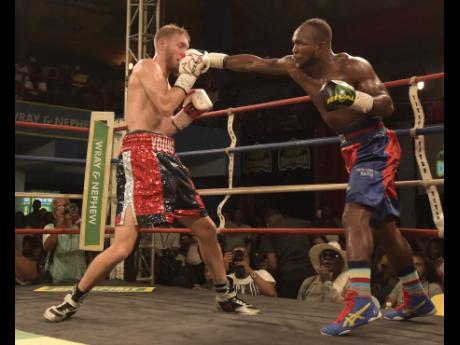 Gladstone Taylor
Jamaica’s Tsetsi ‘Lights Out’ Davis (right) connects with a jab to the head of Canada’s Ryan Young during their Wray and Nephew Contender Series quarter-final bout on Wednesday at the Chinese Benevolent Association auditorium. Davis won on a split decision.
1
2

"TSETSI! TSETSI! Tsetsi!" was the constant cry at the Chinese Benevolent Association auditorium on Hope Road on Wednesday night, as veteran, 39-year-old Jamaican boxer Tsetsi 'Lights Out' Davis scored one of his most thrilling victories locally, when he outpunched 32-year-old Canadian Ryan Young over five rounds.

The win by a split decision earned the Jamaica a place in the semi-finals of the 2017 Wray and Nephew Contender boxing series. Judges Lindell Allen 50-45 and Clifford Brown 49-46 voted for him, while Canadian judge Dave Dunbar scored the fight 48-47 for Young. The other semi-finalists are Jamaicans Sakima Mullings and Richard Holmes and Canadian Phil Rose. Davis now has a 18-5 record, while Davis falls to 11-3.

The atmosphere was electric, and fans were on their feet cheering wildly throughout the heart-stopping encounter. For Davis, it was redemption, as in his first fight in the series on April 19, he also won by split decision, but many of the spectators disagreed with that decision.

Even though the scorecards showed another split decision on Wednesday, there was no doubt in anyone's mind this time around, that Davis was the winner.

Young himself conceded afterwards that " Davis was the man tonight. He had it and I did not. He won and I respect him for the way he fought. We gave the crowd a good show, and made them happy. I enjoyed it, even though I lost."

Young made it through the preliminary round to the quarter-finals with a win inside the distance over hard-hitting Ramel Lewis, but faltered in the quarter-finals as Davis unleashed a steady barrage of punches that overwhelmed him. Davis was cool under pressure, and was unusually subdued. He and his entourage usually put on a show before his fights, but on Wednesday it was all business. Davis showed very little emotion either before or after the fight, and said that the key to victory this time around was his preparation.

"I deliberately did not talk too much. I wanted this victory to prove a point to all those who criticised me in the first fight. I told you all that I was coming back. I am back now and ready to shoot for the final and the top prize of $2 million," he said.

He started his march to victory with an aggressive first round, but Young matched him punch for punch and had the edge on the scorecards.

In the second round, Davis exploded. He came in behind the jab, and his hooks to body and head, and the occasionally uppercut, forced Young to defend himself so as to stay in the fray, and the crowd loved every minute of the excellent exchanges. It got more exciting round after round as both men challenged each other, and the cool and methodical Davis kept soaring to a grand crescendo and a well-deserved victory that the crowd enjoyed immensely, and told him so with their cheers.

For Tsetsi, it was a night to remember.