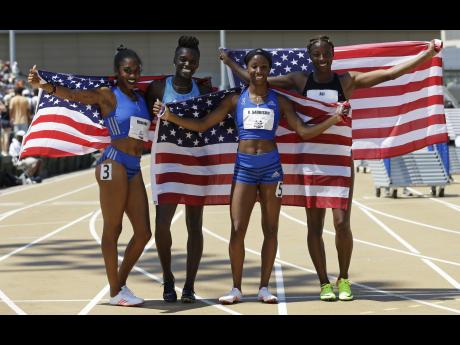 Still, they're thinking a red, white and blue sweep in the event at the London world championships. Just shows the depth of the hurdles.

"Everyone in this event is really strong," said Harrison, who finished in 12.60 seconds to beat Ali by a 0.08 margin. "These girls are going to represent and get that sweep like last year (at the Olympics)."

In Rio, the 1-2-3 hurdles finish was led by Brianna Rollins, who received a one-year suspension in April for repeated failures to disclose her whereabouts to anti-doping officials. Rollins' suspension is retroactive to September 27, 2016, the date of her last missed whereabouts report. Also missing from the world team will be Kristi Castlin, the bronze medallist in Rio who wound up sixth in the final.

"To make this (hurdles) team, you have to work for it and earn it," said Harper-Nelson, who drew a three-month suspension that began in December for a positive test. She told anti-doping officials it was caused by blood pressure medication. "That just shows you how strong our team is."

Harrison went all out despite already having a safety net to worlds thanks to her Diamond League title. She needed the work after breaking her left hand while warming up for a hurdles race this spring.

"To come from breaking a hand to winning, it means everything," Harrison said. "My confidence is where it needs to be."

Pole vaulter Sam Kendricks became a member of the six-metre club (19 feet, 8 1/4 inches) in his win. He even waited through a roughly 20-minute delay while officials filled the water pit for the steeplechase.

"Every great jumper in history had at least one six-metre jump under their belt," said Kendricks, an army reservist. "I wanted to be part of the club, the very prestigious club."

LaShawn Merritt and Allyson Felix both ran the 200m yesterday simply to stay race sharp, with no plans to double in London. They each have automatic entries into worlds in the 400m.

Justin Gatlin won't double, either. The winner of the 100m the night before, Gatlin didn't take the starting line for the 200m. He's been dealing with nagging quad/groin injuries.