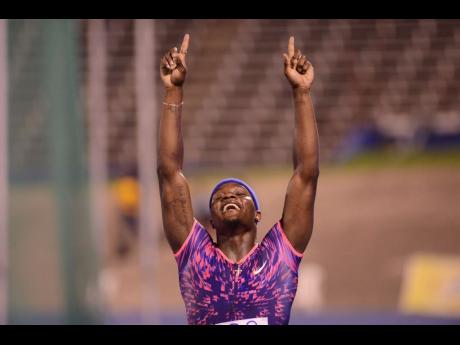 For the small crowd at the National Stadium on Saturday watching the third day of the JAAA National Senior Championships, it was a special moment for them, as in the final event of the night, they witnessed the fastest-ever Men's 110m hurdles race on local soil. Olympic champion Omar McLeod won the event in a new personal best and world leading time of 12.90 seconds and also broke the former stadium record of 12.97 seconds, which he set in 2015.

McLeod also became the fastest man in the country in the event, removing Hansle Parchment's previous national record of 12.94 seconds, done three years ago in Paris.

With new kid on the block, Ronald Levy of the University of Technology, the second fastest man in the world so far in the event, doing well, there were many who thought that the Olympic champion could have been beaten. Not getting his usual good start, McLeod found himself behind, as Levy took the lead. However, after the fourth barrier, it was all over, as McLeod stepped on the gas, producing exceptional speed for the remainder of the race to pull away from his rivals for a convincing win. When the winning time of 12.90 seconds was announced, McLeod could hardly contain himself, as he had both hands in the air in triumph, watching the replay. It was good times for the next three athletes, as Levy clocked 13.13 seconds, Hansle Parchment, 13.19 seconds for third, and the surprise package in the field, schoolboy Dejour Russell of Calabar, was fourth in 13.32 seconds, going over the Olympic height for the first time in his career.

"It was a great race. Thank God, I came out and did what I had to do. My coach might be disappointed, as the target for me was 12.85 seconds, but 12.90 seconds is close enough. Sorry, coach, but I got a new national record and 12.8 will come soon," said McLeod when asked about his win and fast time.

With Levy running well so far this season, expectation was high going into the event, as several fans thought that Levy could have upstaged the Olympic champion.

McLeod was asked if he was motivated by this.

"Honestly, I did not listen to these things because I do not watch what people do before, as they will have to match up with me when the time comes, and then there is where it matters most," continued McLeod.

McLeod said that he is very happy for the likes of Levy, Parchment and company. "I am very proud of the other Jamaicans and there is no animosity between us. I am proud that our hurdlers are stepping up and we are now a dominant force in the world in the event. This is a good thing and I am looking for a 1-2-3 finish in London," he said.

Asked what was next for him and if he can go faster than 12.90 seconds, his reply was: "My next race will be the Diamond League in Paris next Saturday, and for the World Championships, I am aiming for a world record," he said confidently.