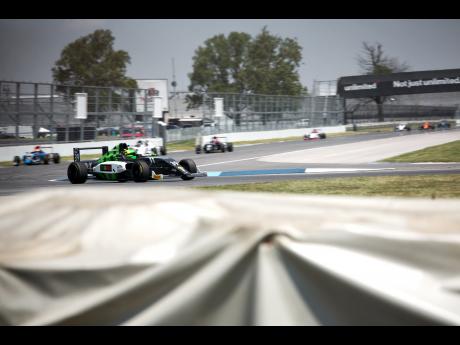 Contributed
Claiminus Media Group Jamaican Formula 4 driver Justin Sirgany maintains his spot ahead of the rest of the pack at the Indianapolis Motor Speedway in Indiana during the US Formula 4 Championship earlier this month. 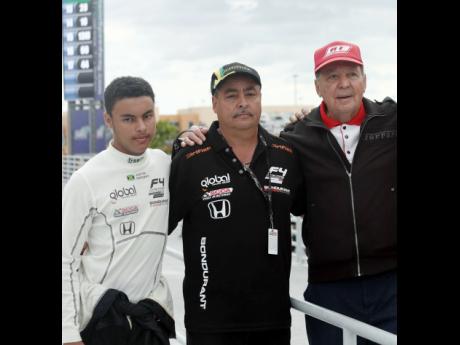 Contributed
Claiminus Media Group Jamaican Formula 4 driver Justin Sirgany (left) poses with his father, Stephen (centre), and grandfather, Richard, while at the Homestead leg of the US Formula 4 Championship in April.
1
2

Justin Sirgany is a 15 year old go kart and Formula 4 (F4) driver, who hopes to make it further up the divisions and drive for a Formula 1 (F1) team someday.

Speed has been a concept familiar to Justin from an early age as he is a third-generation driver. He comes from a lineage of prolific drivers as his grandfather, Richard, was one of Jamaica's champion drivers in the 1960s. His father, Stephen, was also no stranger to trophies, both at the Dover Raceway and in Rally Jamaica.

Justin Sirgany was only five years old at the point he was allowed to get behind the wheels of a go-kart for the first time.

"Racing has just always been in my blood because of my father and my grandfather," Sirgany said. "So the first time I drove a go-kart, I just instantly loved it and I've raced ever since. I was just so excited. There was just never anything bad I thought about it."

Sirgany also looks to inspiration from watching the tapes of races of the late Brazilian F1 legend Ayrton Senna, whom he says he mirrors with his aggressive and equally calculated driving style on the track.

"In go-karting, (my inspiration is) Kyle Kirkwood, who's actually driving in F4, the same series I'm driving in. Just watching him from when I was young in karting, just inspires me to do better. Ayrton Senna wasn't like your average driver. He took things to the next level.

"I'm aggressive as well as being very careful with what I do. I don't want to make any moves that might be too risky and then I could end up not finishing the race. I take calculated risks."

Sirgany signed with the Global Racing Group (GRG) earlier this year to pilot its F4 in the United States-based F4 Championship. Based on his performances so far, GRG's president Christian Pedersen said he is pleased with the commitment he shows on the track.

"Justin always pushes himself to next levels; always looking to improve on every inch of the track to find that 1/100s of a second. He is determined and focused to honour his heritage, and with an eye on reaching the pinnacle of motorsport, Formula 1, Justin is relentless in his efforts," Pedersen said.

Sirgany, who is currently a grade nine student at Hillel Academy, said that being a race car driver while a student, has its challenges, but said he manages to strike a balance well between both priorities.

"I try to get the majority of my work done before I go away for a race," he said. "It takes a lot of effort, but at the same time, I need to do very well in school, but when I go away, I'm very focused on the racing."

The youngster's next race is at the Canadian Tyre Motorsport Park in Ontario, Canada, at the weekend of July 8 and 9. Sirgany said that for the remainder of the season, he is taking things one race at a time and is just aiming for as high as he can go.