Triple jumper Williams hoping to be fully fit for London 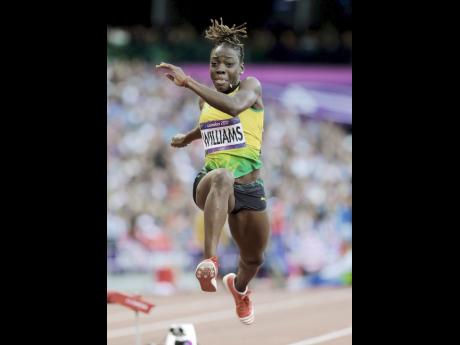 National triple jump champion Kimberly Williams is hoping to be fully fit in time for this year's IAAF World Championships in London.

The 28-year-old Williams has been struggling with a bruised heel injury this season, and this has forced her to miss a number of international meets. However, despite her struggles with the injury, Williams still managed to win the national title with a wind-aided mark of 14.60m (5.1m/s) on Sunday at the National Stadium.

Williams said she was pleased with her performance but she believes that once she is healthy, she will be able to jump much further.

"My last jump was wind-aided and so I only took three (jumps) out of six. I am pretty happy with it and I am just trying to get healthy and do two more meets before the World Championships and see what happens," said Williams.

"I should be able to jump much further because once I am healthy, I always believe that I can jump far, given the right conditions and mindset," she said.

Williams added: "But sometimes when you least expect it, things happen and so you just have to hold the faith and trust God and believe that anything is possible."

Williams, who finished a disappointing fifth at the last World Championships in Beijing, China, picked up the injury while competing in a meet in Guadeloupe earlier this year. With a season's best effort of 14.35m, she noted that her recovery process is going well because she has been doing a lot of work in training to speed up the process.

"I am just waiting on it to heal. But I should be ready for the championships because I haven't been jumping much. I have just been doing some drills on stuff on the surface that the gymnastics used. I have been doing drills on those to keep me in the rhythm," she stated.