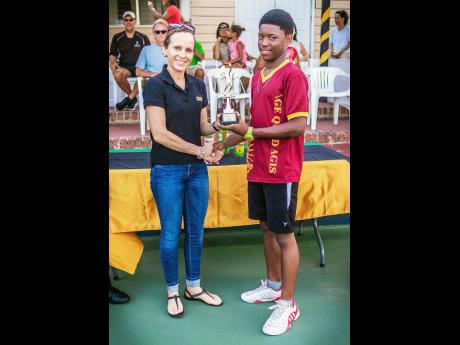 Contributed
Damani Cain, winner of the boys’ 18 and under and 16 and under titles at the All- Jamaica Junior Tennis Championships, collecting a trophy from Deveta McLaren, marketing manager of sponsors Access Financial Services. 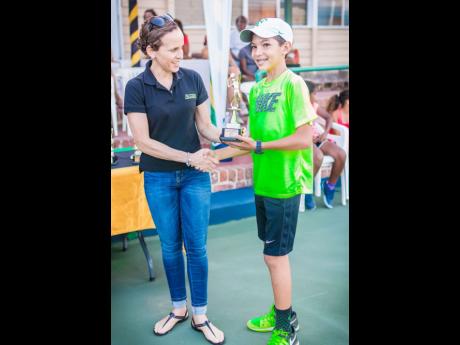 Contributed
Daniel Azar, the boys’ 12 and under and 14 and under champion at the All-Jamaica Junior Tennis Championships, receiving his trophy from Deveta McLaren, marketing manager of sponsors Access Financial Services.
1
2

Cain was among three double champions who were crowned at the tournament. The others were Michaela Stephens and Daniel Azar.

He said afterwards that he was "tired of losing to Cliff and was determined to change things this time.

"I played hard and smart, and got the result that I wanted," Cain added.

The three-day tournament produced excellent and competitive tennis and served as preparation for local juniors who will be participating in the International Tennis Federation (ITF) junior tournament that will be played in Jamaica next week.

In the 16 and under competition, Stephens defeated 11-year old Selena Byrd, who was one of the outstanding players this year. Byrd knocked out some older players on her way to the final and was very competitive against Stephens, but lost 6-2, 6-3. Stephens had to work hard in the 18 and under finals against Canada-based Justine Bryson. She dropped the first set 5-7, but won the second set 6-3 and the super tiebreaker 10-6 to take her second title.