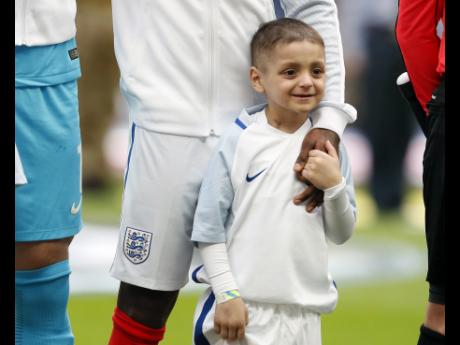 AP
In this file photo dated Sunday, March 26, 2017, Bradley Lowery holds the hand of England’s Jermain Defoe prior to the World Cup Group F qualifying match between England and Lithuania at the Wembley Stadium in London.

Bradley Lowery, a football mascot who struck up a close friendship with England striker Jermain Defoe after being diagnosed with a rare cancer and gained fans across the sport, has died. He was six.

Lowery's family said yesterday in a statement on its Facebook page that he died in the arms of his mother and father.

The statement said "he was our little superhero and put the biggest fight up but he was needed elsewhere."

Lowery, who had neuroblastoma, was a mascot for then-English Premier League team Sunderland several times last season and formed a bond with Defoe, who now plays for Bournemouth.

"He will always be in my heart for the rest of my life," Defoe said the day before Bradley died.

Lowery also was a mascot for an England game at Wembley Stadium in March, and supporters of different clubs made banners and chanted his name at games.

Sunderland said in a statement: "Bradley captured the hearts and minds of everyone at our club with his indomitable spirit, tremendous courage and beautiful smile, which could light up even the darkest of rooms.

"Despite battling neuroblastoma for much of his all too short life, he demonstrated a bravery and fortitude beyond his years that humbled us all. He was truly an inspiration."

Football fans had hoped a massive fundraising effort last year could get him to the United States for pioneering treatment, but Lowery's family announced in December that his cancer was terminal.