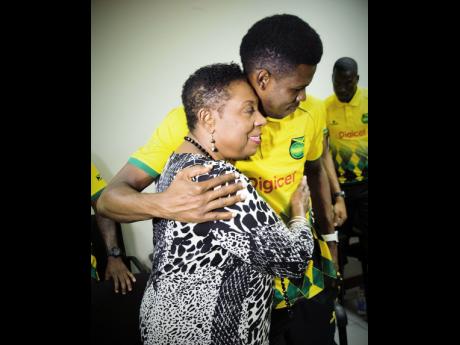 Contributed
Minister of Culture, Gender, Entertainment and Sports, the Honourable Olivia Grange, wishes Jamaica senior men's football team Captain Andre Blake all the best as his team prepares to depart for the CONCACAF Gold Cup in San Diego, California. The Reggae Boyz visited the Minister on Thursday, ahead of their departure.

Jamaica senior men's football team, 23 man strong, departed the island yesterday for the for the CONCACAF Gold Cup tournament in the United States. The Theodore Whitmore coached Reggae Boyz, who recently lost the CFU Caribbean Cup final 2-1 to Curacao, will play the said opponent in their opening game at the Qualcomm stadium in San Diego, California on Sunday at 6 pm Jamaica time.

The Jamaicans will play out of Group C, which also comprises Mexico and El Salvador. The Reggae Boyz will play their second game against Mexico on Thursday July 13, before closing out their Group C fixtures against El Salvador on Monday July 17.

The top two teams in each group and the two best third place teams will move on to the knock out round of the competition.

Jamaica's best showing in the Gold Cup came in the last staging in 2015, where they finished runners up after losing 3-1 to Mexico in the final.