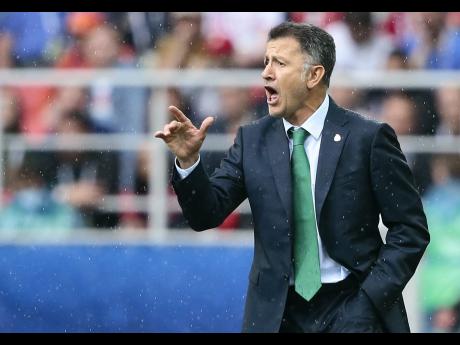 Mexico coach Juan Carlos Osorio has been effectively banned from the Gold Cup by FIFA for insulting match officials.

FIFA banned Osorio for six matches yesterday for his behaviour during the Confederations Cup third-place game last Sunday, when Mexico lost to Portugal 2-1.

Mexico will have to play up to six games to retain the Gold Cup in the U.S., starting tomorrow against El Salvador in San Diego.

Osorio was incensed when his team was not awarded a penalty against Portugal.

He and his coaching staff confronted the referee and other officials to demand a video review of the incident, in which Portugal's Pepe appeared to push Mexico's Hector Moreno as the latter attempted a header at goal. Osorio was ordered to leave the touchline by the referee.

FIFA said Osorio "used insulting words towards the match officials while displaying an aggressive attitude towards them."

FIFA said there were "no grounds for any disciplinary action to be taken" over that incident, sparked when Osorio thought New Zealand unfairly played on while a Mexican player was injured.

If Mexico play fewer than six games at the Gold Cup, Osorio's suspension will carry over to its next internationals.