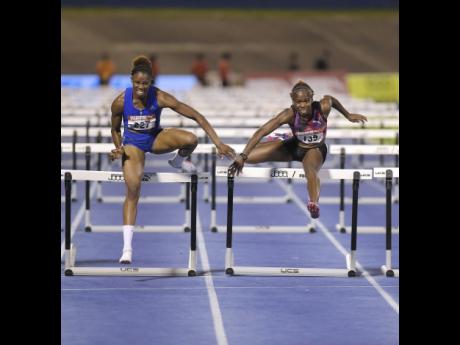 Megan Simmonds seems to be rounding into top gear at just the right time, and with her fourth Diamond League appearance just a few hours away, the pint-sized sprint hurdler will no doubt be looking to improve on her personal best ahead of next month's World Championships.

At the start of June, Simmonds clocked 13.30 at an All-Comers meet inside the National Stadium but has since improved in each race, taking her time down to 13.16 seconds at the JN Racers Grand Prix a week later, before impressing at the recently-concluded National Senior Championships with times of 12.81 seconds in the opening round and a personal best 12.63 seconds in her dart for second place behind world champion Danielle Williams in the final.

It was a timely delivery of a promise shown after her early season 12.83 seconds run registered in April at the UTech Classic. A 12.63 clocking is just about par for the course in an event that is among the most competitive and consistent in terms of high level performances on the international scene and Simmonds, a semi-finalist at last year's Olympic Games in Rio de Janeiro, will tomorrow face some of the ladies she must get the better of in a few weeks at the World Championships when she lines up a stacked 100m hurdles at the Muller Anniversary Games inside London's Olympic Stadium.

World record holder Kendra Harrison who actually set the 12.20 mark at this same meet last year and a fierce American brigade that includes Nia Ali, Shakira Nelvis, Christina Manning, Jasmin Stowers and Kristi Castlin as well as Australian Sally Pearson, who seems to be rounding back into form. Two heats starting at 1:24 p.m. (7:24 a.m. Jamaica time) with the final set for 3:17 p.m. (9:17 a.m.).

Simmonds failed to finish inside the top five at her previous Diamond League competitions and faces a strong challenge if she is to improve on that statistic at tomorrow's meet.

The two-time NACAC Under-23 medal winner and national champion from 2016, has seemingly done considerable work on the first phase of her race and was solid in her first indoor 60m hurdles race, posting 8.07 seconds in Birmingham earlier this year. Only two Jamaicans have gone faster over the distance this season and that bullet start will come in handy.

In the longer version, Simmonds has shown that she can compete with the best on the planet. Only 10 women have cleared the barriers faster than her this season six of those will compete in London tomorrow, making this a truly vital contest for the stout-heart Jamaican.