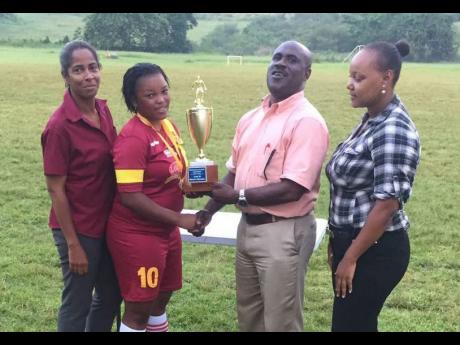 Petagay Dixon followed up her two-goal performance in Holmwood's 5-0 rout of Belair Academy in the semi-final, by scoring the all important goal in the 76th minute.

The tournament which featured just a handful of teams, was played on a round robin basis before four teams were placed in the semi-finals. All the matches were played at Kirkvine Sports Club. This is the second straight year that Holmwood were winning but they previously played under the name, Christiana Academy.

The four parishes of the Confed compete in both the Under 13 and Under 15 categories. The U-13s are named in honour of former Clarendon youth organiser John Green while the U-15s are named in honour of Lloyd Plummer, also of Clarendon. Both men are credited for negotiating the original sponsorship from Juici-Patties boss, Jukie Chin. They are both deceased.

Competition starts this morning at 10 a.m. with Clarendon versus St Elizabeth before Manchester take on St Catherine.

The post-lunch session will see two U-15 games beginning with St Catherine against Manchester before Clarendon and St Elizabeth close the proceedings at 3:30.

An official opening ceremony will take place at 1 p.m.