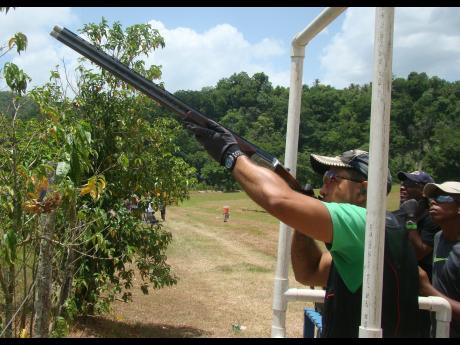 Defending champion Shaun Barnes, with a score of 85, led all shooters in the Jamaica Skeet Club's National Sporting Clays Championship at the end of the first day of competition at the True Juice Estate in Bog Walk, St Catherine, yesterday.

Barnes started with a perfect six out of six birds on station eight of the fifteen-station course that is set in the lush 'green' citrus fields of the True Juice Estate.

Joe Chin was just one bird behind after picking off 84 birds. The top-five shooters in the A Class is rounded out by Richard Azan Jr, 81, while Chad Ziadie is on 80 along with Ian Banks.

Class B is lead by Jordan Thwaites, 81, with Zachary Chen, 75, is in second position, while president Evan Thwaites is in third position, having knocked off 71 birds.

Craig Davis, 75, Danzell Knight, 73, and Matthew Josephs, also on 73, are the top-three shooters in the C Class.

Young Brandon King, who ended the day on 65, just three birds ahead of second-placed JP Dipchard with 62 and Cameron Pang Sang was in third spot with 60.

John Chin shot a surprising 80 birds to lead the E Class with Mark Benjamin, eleven birds back on 69, and Nathan Chin a further nine birds back on 60.

Danzell Knight, 73, Zach Lazarus, 64, and JP Dipchard, 62, are the top-three shooters in the Junior section.

The Sub Juniors category is dominated by John Chin, who shot 80. Johan Subaharan, 65, and Nathan Chin, 60, follows in second and third positions.

The Hunters or Beginners section is topped by Wendy McMaster, 59. Next to McMaster is Damien Sayers, 48, and JJ Ralston, 47.

They return today at 10:30 a.m. to complete the two-day championship.