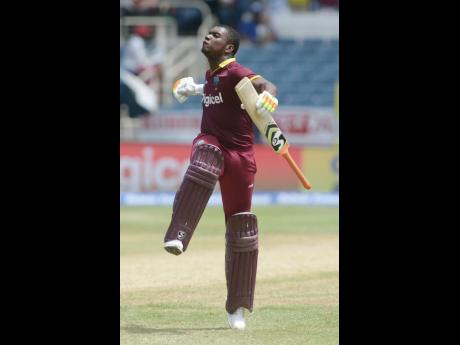 Enterprising West Indies opener Even Lewis says that backing his ability was key in him scoring his second Twenty20 International century against India in their one-off clash at Sabina Park yesterday.

The Trinidadian, who had a below-par one-day international series against the touring Indians in recent weeks, hit a shot-filled, unbeaten 125, which propelled the West Indies to an impressive nine-wicket win.

"I played in the matches in the one-day series and did not come off as well as I would have liked, but I continued to back my ability, and today, I came up trumps.

"India is a team with quality bowlers, and when you can get a hundred against a team like India, it's a good hundred. I am thankful for it," he added.

Having made scores of 21, two, 35 and nine during the one-days, the 25-year-old entered the contest with question marks over his form and ability, with some questioning whether his maiden century was a fluke.

However, in dispatching all the Indian bowlers to various sections of the ground, including several straight sixes, Lewis showed why he is rated as one the region's promising young batsman.

All told, the former West Indies Under-19 representative, who has a first-class average of 30.72 from 22 matches, inclusive of a hundred and eight 50s, hit 12 sixes and six fours.

"It feels good being able to take the team over the finishing line," said Lewis, who, since announcing himself has gone on to represent Barisal Bulls and Dhaka Dynamites in the Bangladesh Premier League, St Kitts and Nevis Patriots, and Trinidad & Tobago Red Steel in the Caribbean Premier League.

"I am not sure where the century will take me, but I am very thankful for it, (I) want to continue backing my ability, and do my best."

Lewis now has an average of 34.75 from 13 Twenty20 Internationals, including two centuries and a half-century. His one-day international record, in the meantime, reads 19 matches, one century, and an average of 26.47. He is yet to make his Test debut.