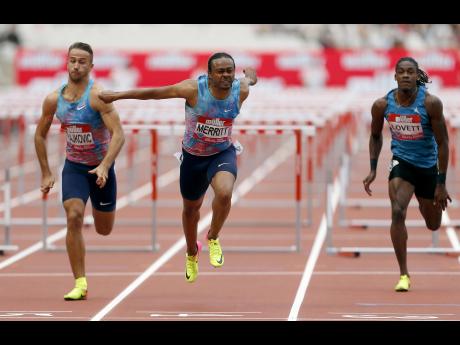 World record holder in the 110m hurdles, Aries Merritt, has praised the Jamaican pair of Omar McLeod and Ronald Levy, but insists that he is not overly concerned with their form.

With the Jamaican duo impressing all season, the American is aware that he will likely have to get through the two if he is to get to the top of the podium at the IAAF World Championships in Athletics in London next month, but insists that he is not paying too much attention to what his rivals are doing.

"I feel like hurdling as a whole has gotten a lot better for everyone. Ever since I ran the world record in 2012, the standard for hurdles has shifted and so you see a lot of people running 13.0 seconds and under in the event," said Merritt. "It's a new era of hurdling and training, and a lot of persons are running well."

Merritt clocked 12.80 to set a new mark at the Brussels Diamond League meet in September 2012 but since then, has had to come back from several injuries, including a kidney transplant. His fastest time since then is 13.04 seconds done in Beijing in 2015. He won the event yesterday at the Muller Anniversary Games in the London Stadium in a season-best 13.09 seconds.

McLeod, the Olympic champion, has recorded the fastest time in the event since Merritt's world-record mark; the 12.90 national record, which he posted at the National Senior Championships last month, and now has the fastest three times this year, including two marks below 13 seconds - 12.90 and 12.96.

Levy burst onto the scene this year and with a season and personal best time of 13.05 to his credit, only McLeod and Sergey Shubenkov (13.01) have gone faster. Levy showed that he was ready to compete with the world's best, taking down a big field at the Paris Diamond League a few days ago and is now considered as a medal prospect heading into the World Championships.

Merritt acknowledged the form shown by the Jamaicans but says his focus will be on his own targets when they face off at the August 4-13 championships.

"Omar is an Olympic champion and has already run sub-13 twice this year, and that's really great. Levy is running very well, but when I am running at a major championships or Diamond League, I can't focus on what everyone is doing, I have to focus on myself, because at the end of the day, someone can go out and break a world record or something, but it doesn't matter, because I have to focus on what I am doing," Merritt said.

"In a championships setting I am aware that they are there, but I am not focused on them. I am just focused on me, because there are 10 barriers and they are your biggest enemy," he added.