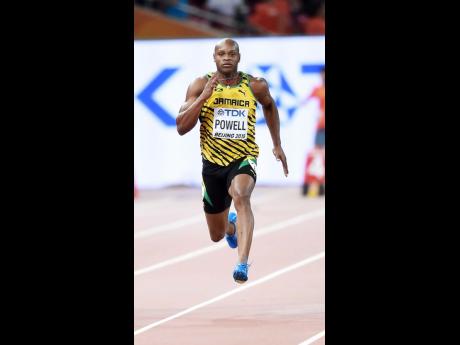 Asafa Powell could be part of Jamaica's 4x100m relay pool at the upcoming IAAF World Championships in London next month. This was the indication given by Dr Warren Blake, the president of the Jamaica Athletics Administrative Association (JAAA), in an interview on Friday. Blake says that his association has the leeway to select Powell.

The 34-year-old sprinter applied for a medical exemption after injury forced him out of the 100m final at last month's JAAA National Senior Athletics Championships. As reigning world champion, Usain Bolt will lead Jamaica's charge in the 100, with Yohan Blake, Julian Forte and Seno-j Givans joining him in the 100 and in the six-man-relay pool.

"The selection committee does have a bit of leeway in selecting the next two," explained Blake. "I think it's only fair", he continued, "Asafa Powell was the Diamond League winner, and we do have the leeway to pick the next two, the fifth and sixth places, whoever we think are the best representatives for Jamaica at that time."

Finishing fourth and fifth at the Nationals were Michael Campbell and Tyquendo Tracey, teammates at the University of Technology.

THE DOOR IS OPEN

Powell, a member of the winning Jamaican relay team at the last World Championships and at the Olympics last year, must demonstrate he can handle the rigours of full-speed racing. "He has to show he is fit", Blake assured. "We have not promised him that he is being considered, but I think we have given him an indication that a door is open, if he can prove his fitness by July 23."

In one famous example, Tayna Lawrence missed the 2004 National Championships due to injury, but was inserted into Jamaica's historic Olympic 4x100m team. Lawrence, Sherone Simpson, Aleen Bailey and Veronica Campbell-Brown set a national record and gave Jamaica its first Olympic gold medal in the event. Lawrence's was also remembered for her fast start ahead of the team's success.