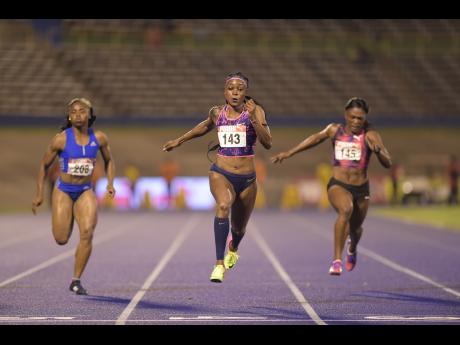 Fedrick Dacres, Elaine Thompson and Novlene Williams-Mills yesterday became the first Jamaicans to secure their spots in the revamped US$50,000 ($6.4 million) IAAF Diamond League finals for their respective events after mixed fortunes at yesterday's Muller Anniversary Games meet inside the London Stadium.

Thompson underlined during the build-up to the meet that she will be focusing on getting her start and transition right, but was twice left in the blocks before hitting the turbo in the two rounds women's 100m event.

The double Olympic sprint champion finished second in the heat in 11.16 in what was her first 100m loss since July 11, 2015, but returned to winning ways in the final, crossing the line in 10.94, running into a -1.4 headwind, to finish ahead of Dafne Schippers, 10.97, and Blessing Okagbare, 10.99. Thompson had experienced discomfort with her old spikes, so she ran in a pair normally used in early-season track work because she is awaiting a new set of spikes to be provided by her footwear sponsors, Nike.

Defending champion Thompson, who now has 24 qualification points, has already booked her lane in the event final, which takes place at the Brussels Diamond League on September 1, with two women's 100m races still left on the Diamond League calendar before then.

Thompson admitted that she still has some work to do before she returns to London for the World Championships. She noted that she does not allow her dominance in the event to create any complacency.

"Actually, sometimes, I still get nervous. Today, I was very nervous because it was my first time running in these spikes, so I felt weird," she shared. "But, no, I don't think about my wins. I have mental control. I don't think about anything beyond what I'm supposed to think about; just trying to get the execution and transition right.

Christania Williams (11.34), who holds the eighth and final qualifying spot at the moment, did not advance from the heats, neither did Sashalee Forbes (11.36). The pair finished sixth and fifth in their respective heats.

Dacres continued to delight in the discus event and, despite what he described as a sluggish feeling and a headache, he was able to produce his eighth throw over 66 metres this season with a 66.66m effort, which gave him second place behind world leader Daniel Stahl, 66.73m, and Philip Milanov, 66.65m.

This placed Dacres as the third-best thrower on the circuit this year with 22 points, seven less than Stahl and three behind Milanov. The three will renew their rivalry at the Brussels Diamond League meet in the discus finale.

"In the first throw, I never felt ready today. My body wasn't what it normally was plus I had a headache, so I had to fight through that, so I am happy that I came out and got a 66m throw. It shows that I am in good form," Dacres said.

Novlene Williams-Mills, the 2014 Diamond Race winner in the 400m, was fourth in the event yesterday in a time of 50.60, but comfortably secured her lane in the final, which is also set for Brussels, after increasing her tally to 25 points. Shericka Jackson is the fifth-best on the points standing with 10 points and was also fifth yesterday in 50.77, with Verone Chambers finishing ninth in 53.22.

The event was won convincingly by Allyson Felix, who clocked a world leading and simply stunning 49.65 seconds, winning ahead of Courtney Okolo, 50.29 and 400m hurdles specialist Shamier Little, 50.40.

Janieve Russell bounced back from her disappointment at the National Championships with a big win in the 400m hurdles, stopping the clock at 54.02 seconds to win ahead of Cassandra Tate, 54.59, and Wanda Nel, 54.73.

Damar Forbes finished fourth in the men's long jump with a best leap of 7.92m. The event was won by Jeff Henderson in 8.17m. It was close from second to fourth with Michael Hartfield, 7.99m, taking second from Marquis Dendy, 7.95m.

Rasheed Dwyer, 20.49, finished seventh in the 200m behind winner Ameer Webb, 20.13, while Megan Simmonds fell at the eighth hurdle in the 100m hurdles heats, while contesting for a top-three spot.

The IAAF Diamond League encompasses 32 Diamond Disciplines, following a championship-style model. Athletes earn points at the qualification meetings to qualify for the final of their discipline.