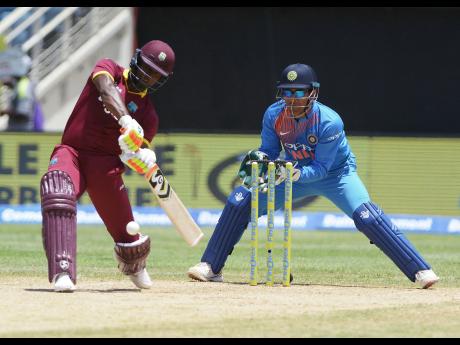 Ian Allen
West Indies opening batsman Evin Lewis on the go during his innings of 135 against India in a T/20 cricket match at Sabina Park in Kingston on Sunday.

Captain Carlos Brathwaite believes that guts and determination were keys to the West Indies defeating India by a commanding nine wickets in their one-off Twenty20 International clash at Sabina Park yesterday.

Set a challenging 191 to win on a good batting pitch, the West Indies cruised to their target at 194 for one off 18.3 overs.

Leading the victory charge was young Trinidad opener Evin Lewis, who, in slamming his second century, ended undefeated on 125.

Experienced middle-order batsman Marlon Samuels and opener Chris Gayle chipped in with 36 not out and 18, respectively.

"Everyone in the team fought hard," said Brathwaite, while also referring to their bowling performance, which was led by fast bowlers Jerome Taylor and Keswick Williams, who claimed two wickets apiece.

"It was a very good wicket to bat on and a very good score they posted, but we always believed that we could chase it down."

Winning the toss and electing to field, the West Indies got off to a poor start as Indian openers captain Virat Kohli and Shikhar Dhawan showed their shot-making abilities in a rollicking 64 runs opening stand inside the first six overs.

However, after removing Kohli, caught off the bowling of Williams for 39, off the third ball of the sixth over, and Dhawan run out for 23, also by Williams two balls later, things turned a bit in the West Indies' favour - a fact they held on to.

Supported by Taylor, as well as timely contributions from off-spinners Sunil Narine and Samuels, the West Indies were able to limit the Indians to below the 200-run landmark.

Middle-order batsman Dinesh Karthik, 48, made the most runs for India.

Possessing some of the best hitters in the game, the West Indies then went about their run chase in a confident manner, with the 25-year-old Lewis and Gayle putting on 82 for the first wicket.

Gayle was eventually dismissed in the 9th over with the team well within the required run rate when he was caught by wicketkeeper MS Dhoni off the bowling of left-arm wrist spinner Kuldeep Yadav.

The dismissal, however, did not slow down Lewis, who, in showing range and poise with his shots, treated the good crowd to 12 pulsating sixes and six fours.

"It's good to see the guys went out there and played with expression," Brathwaite said. "Chris did not get off as well as he would have liked, but then Evin Lewis took over the mantle from him.

"Lewis got an even hundred in Florida against India last year as well, and on scoring this hundred, you could see he wanted to take it directly to the end. Kudos to him. He has shown a lot of maturity over the last 12 months."

Kohli, in assessing his team's defeat, pointed to dropped catches as well missed opportunities to make a total in excess of 200 runs.

"I thought we were on course for 220-plus, but we fell about 30 runs short," he said. "Then when we bowled, (but) well we did not take our chances in the field, so that cost us."

In winning the clash, the West Indies were able to salvage some pride, having lost the preceding one-day international series 3-1.