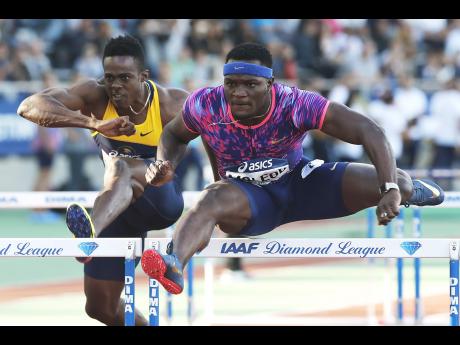 AP
Jamaicans Omar McLeod (right) and Ronald Levy (left) have been highly touted to gain medals in the Men's 110m hurdles event at the IAAF World Championships in London next month.

With the conspicuous changing of the guard in Jamaican sprinting evident from the JAAA National Senior Athletics Championships, the common sentiment

heading into the IAAF World Championships in London seems to be that Jamaica will not be able to match its recent medal success of 12, then 11. This comprised seven gold, two silver and three bronze from Beijing 2015, and the 11 from the Rio Olympics last year comprising six gold, three silver and two bronze. The fact that stars Usain Bolt and Elaine Thompson, for one reason or another, will be lining up in only one of the individual sprint races, has subliminally fed into that cautious narrative.

In reality, though, while it will be a challenge for Jamaica to match the 12 medals won in Beijing in 2015 and the 11 won in in Rio in 2016 in terms of quality, upon closer analysis, an 11-medal haul is very possible even, for this transitional Jamaica team.

The women's 4x100 relay team with Thompson and veteran Simone Facey, in addition to the young guns led by Jura Levy, must be favoured to at least make the podium. The women's mile-relay team has most of the big hitters from the last World Championships, including anchor-leg hero Novlene Williams-Mills, Shericka Jackson, Stephenie Ann McPherson, plus an improving Chrisann Gordon, and should definitely challenge for the gold.

It will be more challenging in the men's mile relay with a squad depleted by injuries. However, in newly crowned national champion Nathon Allen, the impressive Demish Gaye, in tandem with the Jamaican record holder Rusheen McDonald in the mix, the Jamaican mile relay team still possesses enough quality to win at least a bronze medal.

We are up to a projected seven medals without mentioning the in-form discus thrower Fedrick Dacres, who has been consistently over 66 metres this season. With that kind of form, he must be favoured for a top-three finish. The national 100m hurdles champion, Danielle Williams, has not even been mentioned as yet. Williams should be ultra motivated and confident of proving to the world that 2015 was no fluke, especially after unfortunately missing the Olympics last year after her mishap in the Trials. Her personal-best time of 12.53 ran at the Trials, points to timely improvement and form heading into London. Worst-case scenario: at least one her or Megan Simmonds, will medal.

We are conservatively up to eight medals without factoring in Yohan Blake in the 100 and 200m events. The 2011 100m World champion seems back to a reasonable semblance of form, and has been Jamaica's top sprinter so far this season. There is still a general cautious optimism surrounding Blake's full fitness and how he will cope with the rigours of doubling at the Championships. From what we have seen again, conservatively, Blake should give us at least one, possibly two sprint medals. That puts us at nine medals.

We get now to one of the rapidly emerging stars of Jamaican track and field in Shericka Jackson. The now Olympic bronze medallist in the one-lap event has genuine elite quality and talent and will not just be looking to medal, but to improve on the quality of her Olympic bronze. Jackson's projected medal puts us at ten.

To round out my 11 medal prediction will be the new kid on the block, 110m hurdler Ronald Levy, who has impressed all with his development and maturity this season. Again, all things remaining equal, which they never do, especially in the sprint hurdles, Levy should be right there on that podium alongside Omar McLeod. Eleven projected medals all accounted for. See below.