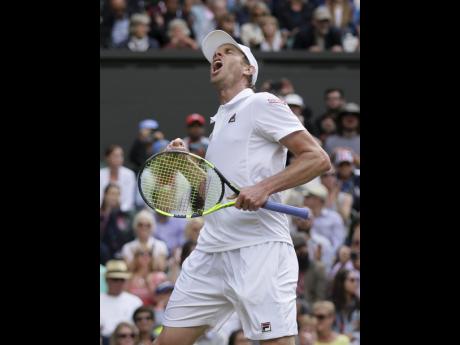 Limping between points and fading down the stretch, defending champion Andy Murray was stunned by 24th-seeded Sam Querrey of the US 3-6, 6-4, 6-7 (4), 6-1, 6-1 in the Wimbledon quarter-finals yesterday.

The No. 1-seeded Murray came into the tournament dealing with a sore left hip and it clearly impeded him at Centre Court. He grimaced as he stumbled or landed awkwardly while attempting shots.

Querrey took full advantage to reach the first Grand Slam semi-final of his career and the first for any American man anywhere since Andy Roddick was the runner-up at Wimbledon in 2009.

"I am still in a little bit of shock myself," Querrey said.

There was another quarter-final surprise later Wednesday, when three-time Wimbledon champion Novak Djokovic stopped playing because of a right-arm injury while trailing 2010 runner-up Tomas Berdych of the Czech Republic 7-6 (2), 2-0. After dropping the opening set, Djokovic took a medical timeout while a trainer massaged his arm. A day earlier, during his fourth-round match, Djokovic had his right shoulder worked on by a trainer.

Seven-time champion Roger Federer moved into his 12th semi-final at the All England Club with a straightforward 6-4, 6-2, 7-6 (4) victory over 2016 runner-up Milos Raonic. That left Federer as the only member of the sport's so-called Big 4 still standing: In addition to the exits for Murray and Djokovic, Rafael Nadal lost in the fourth round. That quartet has combined to win each of the past 14 Wimbledon titles.

Murray is normally a terrific returner, but Querrey hit 27 aces. He was impeccable for portions of the match, finishing with 70 winners and only 30 unforced errors.

"He was dictating all of the points," Murray said.

From one-all in the fourth, Querrey grabbed eight games in a row to take that set and lead 3-0 in the last.

"I didn't start my best, but I just kept with it. Kept swinging away and then really found a groove in the fourth and fifth sets," Querrey said. "And everything kind of seemed to be falling my way then."

It is the second year in a row that the 29-year-old Californian upset the defending champion and top-seeded man at the All England Club. In 2016, he ended Djokovic's 30-match Grand Slam winning streak by beating him in the third round.