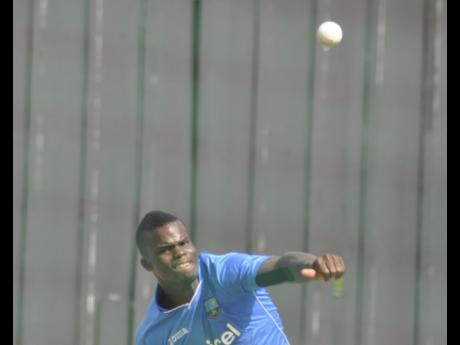 Opener Bhaskar Yadram struck a critical half-century, but West Indies Under-19 were forced to overcome a late-innings slump before pulling off a two-wicket win over South Africa Under-19s in the second Youth One-Day International yesterday.

Set a modest 208 for victory, the young Windies were coasting along at 165 for three in the 39th over, but suffered a collapse where five wickets tumbled for 35 runs in the space of 31 balls.

Tottering on 200 for eight in the 44th, the Caribbean side were rescued by the lion-hearted Jeavor Royal, who ended unbeaten on 31 off 17 deliveries to take the team over the line.

Yadram had earlier top-scored with 81 off 116 balls, while captain Emmanuel Stewart chipped in with 45 off 69 balls.

Sixteen-year-old fast-bowler Gerald Coetzee led the attack with two for 55.

The South Africans had been limited to 207 for eight off their 50 overs, after opting to bat first at City Oval, with wicketkeeper Wandile Makwetu top-scoring with 53 and openers Matthew Breetzke (37) and Jiveshan Pillay (36) playing supporting roles.

Left-arm spinner Joshua Bishop claimed two for 30 from his 10 overs while Royal, also a left-arm spinner, laid the groundwork for his eventual all-round display with two for 34.

The hosts got a healthy start from Breetzke and Pillay, the pair adding 81 for the first wicket before Royal's introduction triggered a collapse, where four wickets perished for nine runs in the space of 38 deliveries.

The five-match series is tied 1-1, with the next game scheduled for Friday at the same venue.