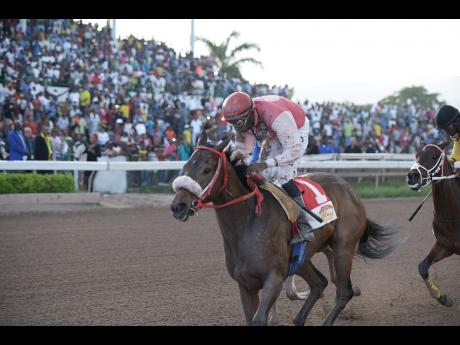 SUPER filly SHE'S A MANEATER is all set to rewrite the chapters of local racing this afternoon by being crowned the third filly to close a Triple Crown at Caymanas Park.

History appears written ahead of the Jamaica St Leger following her brave and classy victory in last month's Jamaica Derby, which extended her race record to eight wins and a second-place finish from nine starts.

SHE'S A MANEATER passed her 12-furlong Jamaica Derby test with distinction. She chased Oaks winner MARLENE MY LOVE, whose rider, Robert Halledeen, tried to block the rail coming off the home turn. However, the flying filly overcame that hindrance to register a 11/2 length victory over late-closing SOTOMAYOR.

Going two furlongs shorter, SHE'S A MANEATER should have no problems in her bid to join SIMPLY MAGIC (2002) and ALSAFRA (2008) as Triple Crown-winning fillies.

She will head to post as the overwhelming favourite to complete the Triple Crown from postposition two, a similar rail-hugging draw after breaking from the one hole in the Derby.

Her stalking pace makes it literally impossible for her to be outsped, a tactic Halledeen tried in the Derby aboard MARLENE MY LOVE, who had the Jamaica Oaks from in front.

MARLENE MY LOVE's withdrawal with injury leaves the St Leger at SHE'S A MANEATER and jockey Omar Walker's mercy. The speedy filly's participation was the only hope the rest of the field had of a horse being able to take SHE'S A MANEATER off her bridle earlier than Walker would prefer.

SOTOMAYOR, who had beaten SHE'S A MANEATER at a mile in last December's Jamaica Two-Year-Old Stakes, is poorly drawn on the inside beside the filly at post three and, more than any other runner in the event, needs a rabbit to get her off her bridle.

After 10 furlongs in the Derby, SOTOMAYOR was nine lengths behind SHE'S A MANEATER, three lengths third a furlong out, behind a dying MARLENE MY LOVE, and was well held to the wire at the end of 12 furlongs.

Richard Azan's MARKET FORCE, fourth in the Derby, should turn the tables on second-place SOTOMAYOR if he reproduces his Governor's Cup run.

Awarded the 10-furlong Governor's Cup in the stewards' room, MARKET FORCE was 21/2 lengths clear of fourth-place SOTOMAYOR. It was only the distance that caused those placings to be reversed in the Derby.