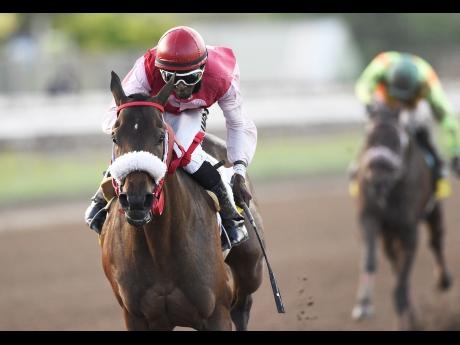 "UNBELIEVABLE" and "super" were the plaudits thrown at SHE'S A MANEATER by trainer Wayne DaCosta and jockey Omar Walker, respectively, after the imposing filly yesterday made completing the Triple Crown seem like a routine exercise gallop with an easy victory in the Jamaica St Leger.

Eased into third position, six furlongs out down the backstretch, after surveying stablemate FEARLESS SAMURAI and THORNHILL MISS go at it on the lead, SHE'S A MANEATER said hello and goodbye to the battling duo, quickly taking control coming off the home turn.

It was a matter of how far thereafter and, as DaCosta had predicted following her length-and-a-quarter victory in last month's Derby, it was even easier six-and-three-quarter lengths clear of MARKET FORCE, who got the better of SOTOMAYOR in a private battle for second.

"It's just as great as the first one," said DaCosta, whose other Triple Crown winner was WAR ZONE, who completed the feat unbeaten in 1996.

"This filly is unbelievable. Whe does everything right. Had it not been for interference in the Jamaica Two-Year-Old Stakes, she would have been unbeaten," he added.

Walker, who was winning his first Triple Crown, praised the filly.

"She's a super horse. All I did was get a good break and position down the backstretch. When she kicked, it was over, " he pointed out.

SHE'S A MANEATER joined SIMPLY MAGIC (2002) and ALSAFRA (2008) as fillies to complete the triple at Caymanas Park, the 11th horse to have done so, a feat that left owner Winston Kong searching for words.

"Great! That's all I can say. I feel great, "said the silver-haired retiree, who also bred the champion filly.

SHE'S A MANEATER clocked 2:08.2 for the 10-furlong race, completing the Triple Crown of 1000 Guineas, Jamaica Derby and St Leger.