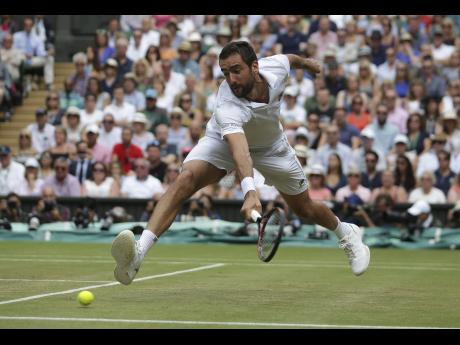 After Roger Federer closed out a Wimbledon final that was more of a coronation than a contest with an ace, he sat in his changeover chair and wiped away tears.

That is when it hit him: His wait for record-breaking number eight was over. Until then, Federer was not focused on the notion of winning the grass-court tournament more often than any other man in the history of an event first held in 1877. All he had been concerned and consumed with was being healthy enough to compete at a high level and, he hoped, to win a title, regardless of what the total count would be.

Capping a marvellous fortnight in which he never dropped a set, Federer won his eighth Wimbledon trophy and 19th Grand Slam championship overall by overwhelming Marin Cilic 6-3, 6-1, 6-4 in merely one hour and 41 minutes yesterday.

"To mark history here at Wimbledon really means a lot to me just because of all of that, really," he said. "It's that simple."

He could not be sure another final, let alone title, was possible a year ago, when he lost in the semi-finals, then took the rest of 2016 off to let his surgically repaired left knee heal.

Yesterday's outcome was only in doubt for about 20 minutes, the amount of time it took Federer to grab his first lead.

Cilic said afterwards that he developed a painful blister on his left foot during his semi-final Friday, and that affected his ability to move properly or summon the intimidating serves that carried him to his lone Grand Slam title at the 2014 US Open, where he surprisingly beat Federer in the semi-finals.

This one was all Federer, who had been tied at seven championships with Pete Sampras and William Renshaw in what is still officially called Gentlemen's Singles. With clouds overhead and a bit of chill in the air yesterday, Federer's early play was symptomatic of jitters. For everything he's accomplished, for all of the bright lights and big settings to which he has become accustomed, the guy many have labelled the 'GOAT' Greatest of All Time admits to feeling heavy legs and jumbled thoughts to this day.