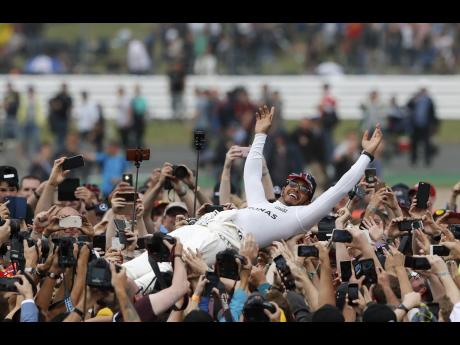 Just like his tyre, Sebastian Vettel's championship lead was shredded at the British Grand Prix.

A 20-point lead was slashed to a single point by Lewis Hamilton after the Mercedes driver led from start to finish to cruise to a fourth win of the season as Vettel capitulated halfway through the season.

Vettel was never in realistic contention for victory yesterday, but he was still third entering the penultimate lap a finish that would have ensured 10 points still separated him from Hamilton. But Silverstone witnessed a remarkable collapse, a final twist on an afternoon of thrilling racing.

A front-left blowout on Vettel's Ferrari sent rubber remnants of the tyre flying across the track as the four-time world champion crawled back into the pits for repairs just in time. It ensured Vettel was still able to finish seventh and collect the points that kept him top heading into the Hungarian Grand Prix on July 30.

NO ONE TO BLAME

"It could have been a bit better for sure, but, a disaster? I don't think so," Vettel said. "I don't think there is anyone particularly to blame."

Troublingly for Ferrari, Vettel's tyre trouble struck a lap after teammate Kimi Raikkonen's car also experienced a puncture as he was set for second. It allowed Valtteri Bottas to complete a Mercedes one-two with Hamilton as Raikkonen completed the podium.

"I don't wish any misfortune on anyone," Hamilton said, "but we didn't have any issues (unlike the last two races when Hamilton lost ground in the championship)."

There was a faulty headrest in Azerbaijan that contributed to Hamilton finishing fifth, followed by a five-place grid penalty for an unauthorised gearbox in Austria, where he was fourth.

Now, Hamilton is back on top of the podium, for a record-equalling fifth time at his home race.

"Obviously, the pendulum has swung this weekend," Hamilton said. "That is only good for Formula One and good for the fans with the close battle we continue to have."

Hamilton was not on the podium for long. Soon, he was among the fans who roared him to glory, vaulting out of the pit line and crowd-surfing.

The celebration carried a pointed message to critics of his failure to attend a showcase of the sport in central London that was attended by the 19 other drivers. Unlike in Trafalgar Square, there were certainly not any jeers of Hamilton's name at Silverstone as he joined Jim Clark and Alain Prost as five-time winners of the race.

"There is no reason to question my preparations," Hamilton said. "(There was) so much negativity trying to pull the weekend down, but, obviously, it had no effect ... the fans were out-and-out loving and supporting all weekend."